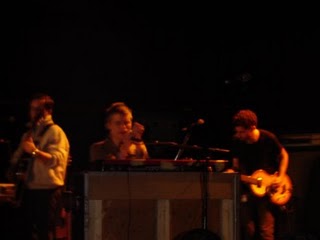 The approaching holiday weekend didn’t deter concertgoers from attending White Rabbits’ sold-out concert at Bowery Ballroom last Thursday night. As they performed an hour-long set of older fan favorites as well as tracks off their most recent release, It’s Frightening, White Rabbits had all in attendance captivated by their live show.

The band’s energy was undeniable from the moment they took the stage for first track, “Rudie Fails.” Whether it was Steve Patterson’s vigor while playing piano or guitarists Alex Even and Greg Roberts jumping around onstage, White Rabbits kept the crowd engaged. Their constant interaction was impressive and permeated throughout the venue. 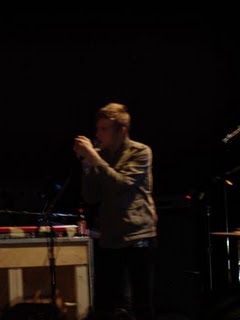 The lack of between-song banter didn’t matter. Concertgoers were there to see a powerhouse set from the Brooklyn-based band and that’s what they got. Led by dual vocalists Patterson and Roberts, each voice matched the energy of the songs showcased and, at times darker musical accompaniment provided. One highlight was seeing the array of instruments played by the six-piece. Throughout the performance, most band members rotated between helping out on percussion, tambourine as well as keyboards, and always managed to keep things fresh.

The band’s set moved quickly and with great diversity. Alternating from more upbeat track “The Lady Vanishes” to slower ballad, “Company I Keep,” Patterson left the piano for the first time of the night and proved he has just as much energy manning the mic alone as he does on the keys. Older tracks like “The Plot” and “While We Go Dancing” seemed to draw the most excitement while the crowd favorite of the night was vigorous “Percussion Gun.” With half the band playing the drums and the audience dancing and singing along word for word throughout the track, White Rabbits had the audience begging for more and they didn’t disappoint. As they took the stage for an encore, the show ended shortly after midnight to a satisfied audience. And, from the looks of it, the band had a blast as well. 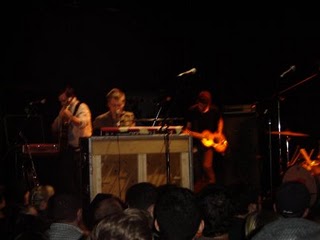 It’s evident from Thursday’s show that White Rabbits is one band to be on the lookout for. With a slot at this year’s All Points West festival, there’s a good chance we’ll be hearing a lot more from them soon.

The Antlers opened up the night and played a 40-minute, six-song set. While the three-piece band has more of an ambient, atmospheric vibe, they had trouble winning over the audience. More onstage interaction between the band members could have resulted in a different outcome. While tracks like “Two” have much potential, less musical accompaniment and more vocals would have made for a much different concert experience.

Cymbals Eat Guitars brought along much-needed energy as the venue began to fill up shortly after 10 p.m. Their mix of indie, alternative rock, and, at times screamo, left the audience questioning what would come next. But, isn’t that what live shows are all about? The band interacted well onstage, which only kept the crowd more fascinated.

While Cymbals Eat Guitars have been compared to Built to Spill and early Modest Mouse, regardless of the comparison they definitely put their own spin on their material as could be witnessed throughout the entirety of their set. Songs like “Cold Spring” had solid electric guitar features while frontman Joseph Ferocious was a fun sight to see while jumping around onstage. Having received rave reviews by music publications and blogs alike, the band is on the cusp of indie greatness.

You can read this review, originally posted on Venus Zine here.

I stumbled upon your Blog while doing a search about rabbits on Google. It then came to my attention that your blog is popular. Are you aware that you could be making an income with your blog? You should check out http://www.bloggingtothebank.com. It's a site that shows you how to generate an income off of your blog. It's 100% risk free. I tried it and am very satisfied with the results.