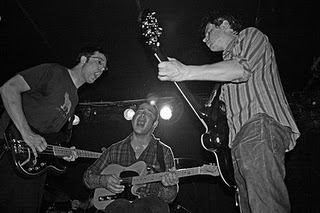 Mercury Lounge was packed last night in celebration of the official launch of WFUV’s new indie music channel, The Alternate Side. And, what better way to kick off the channel than New York’s very own indie darlings Pela and The Postelles? 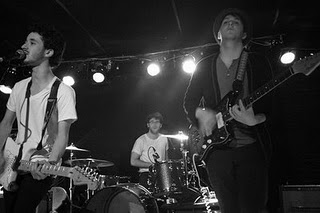 After a short introduction by the station’s staff and founders, The Postelles (photo above) took the stage playing tracks off their upcoming debut full length which is being produced by none other than Strokes’ guitarist Albert Hammond, Jr. The band has garnered rave reviews as of late with their 60s inspired pop and rock ‘n’ roll sound. With hooks galore encompassing tracks like “Hey Little Sister” and “123 Stop” it’s no wonder they’ve landed a spot at this year’s All Points West Festival.

A Monday performance while the sun is still shining can’t be enticing for any band, but Pela sure showed concertgoers that it’s quite possible and rather enjoyable. Playing a 45-minute set Pela reminded everyone of what a real rock show should be. Their energetic set and engaging stage presence permeated throughout the room, having the crowd hooked and screaming for more. Whether it was frontman Billy McCarthy leaping off the stage into the crowd or tearing panels off the ceiling (photo below), Pela sure knows how to grab the audience’s attention. 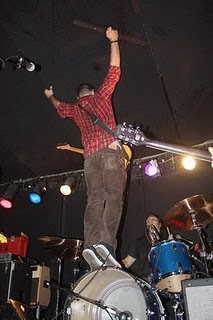 The band has been getting quite a buzz and their recent tour dates with The Gaslight Anthem has only helped them gain the recognition they deserve. From last night’s performance, it is evident that Pela will be selling out their own headlining shows across the country in no time. Whether it was catchy track, “Tenement Teeth” or their solid cover of The Clash’s “Guns of Brixton,” Pela left those in attendance impressed. 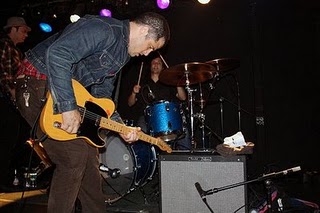 “Pela rhymes with Layla,” McCarthy told the crowd. Soon after guitarist Nate Martinez chimed in, joking, “In Spain it would be paella, but we’re not in Spain.” 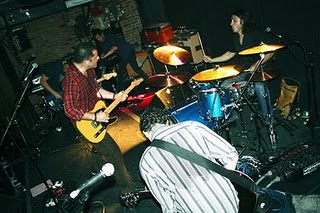 Pela’s talent is undeniable and I highly recommend checking them out live for yourself, as listening on MySpace just won’t cut it. For more on Pela be sure to visit their Web site and catch a show when they’re in town. You won’t regret it. If that’s not enough for you, watch a video of them covering The Clash below.

For more on The Postelles, be sure to visit their MySpace and to hear more of your favorite indie bands, be sure to tune into 90.7 or check out The Alternate Side online!