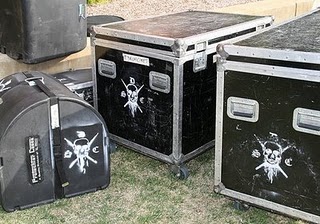 Ever since I booked my flight for Texas to attend the South by Southwest (better known as SXSW) music festival later this month, I’ve been reminiscing about touring with Army of Me last year. Definitely one of the best times at the start of my music blogging career, I learned a lot about a typical day in the life of a band. The struggles, the triumphs, the music. Originally written for my internship, I thought I’d post my brief blog entry about my experience below. Love to know what you think!

Growing up during the height of the boy band era and attending all their concerts, I’ve always wondered what it’s like being on the other side. Not the fan waiting anxiously for the doors to open to get a spot closest to the stage, but to be backstage. I’ve always been curious to what goes on behind the scenes of a tour — what bands do before the show, the real deal on groupies, what the inside of a tour bus looks like — the whole lifestyle.

A few weeks ago I got a chance to find out what really goes on during a typical concert when I toured with Army of Me on the “Get A Life” tour. I witnessed the diversity between an up-and-coming band, traveling from show to show in a small, smelly, 15-passenger van converted to fit five guys, their equipment and whatever else they need for months on tour and a more well known band, punk rockers The Used, who travel in a bus with separate bunks, a big screen TV and a back room nicely furnished, almost reminiscent of a living room.

Most surprising was how down to earth and friendly each band was. You hear stories of bands that have ridiculous requests or who are jerks to their fans and groupies, but this wasn’t the case. Speaking of groupies, do they even exist these days? Apparently they do according to bass player Jeph Howard of The Used, and he’s not too keen on them. “Groupies are gross. Groupies are the girls that sleep with all the other band dudes. I’m not down with that.” Although, maybe groupies only exist for the bigger bands. Army of Me drummer Dennis Manuel doesn’t think they have any. “Even if we have any groupies, if they make it far enough backstage and then out to the back of the club, and they see what we’re in [the van] it kind of kills the mood.” Good point.

My newfound knowledge of bands and their dislike for groupies wasn’t the only thing I learned on tour. I never realized how grueling touring could be and how it’s a lot less glamorous than I had previously imagined — it’s not all sex, drugs and rock & roll. Often it’s five guys in a hotel room sharing beds or having to push a broken down van to a nearby repair shop. While at points life on tour is rough, the good outweighs the bad and when I asked each member what they’d be doing if it wasn’t for music, they didn’t have an answer. In the end, it’s all about the music. Army of Me frontman Vince Scheuerman explained it as being all he wants to do right now. “This is my life, this is what I do. I play music and I believe in my music. As long as I feel that way I’m going to keep doing it. The day I wake up and I’m like, ‘I don’t want to do this anymore,’ I’ll figure something out.” 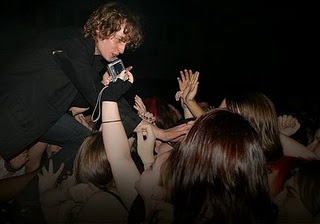 To read more of my interviews on tour with Army of Me and The Used click on the links for both bands on the right under Exclusive Interviews or read You Sing, I Write’s May archives.