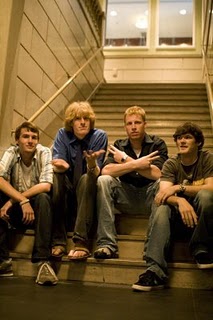 I received an email a while back from frontman Jim Ivins of the Jim Ivins Band, telling me about their recently released EP, Back To Reality. Produced by Ace Enders (formerly of The Early November), the band has opened for a few musicians I’ve covered, including The Ataris and Sparky’s Flaw. So, I decided to give them a listen and liked what I heard.

The songs on Back To Reality are well-produced tracks both musically and lyrically. Begging references to The Ataris, Yellowcard and even New Found Glory, the Jim Ivins Band’s mix of pop-rock and emo-punk pulls the listener in. In fact, while listening I felt as if I was taking a trip down memory lane vividly picturing myself waiting in line to get front row at a Good Charlotte or New Found Glory concert.

When checking out their MySpace, one hears the progress from older and guitar heavy songs to the band’s latest release. First song off the EP, “The Chance” is a stand-up track that tells the story of unrequited love. With catchy choruses and light, soft vocals that recall fellow pop-punk band Yellowcard (whatever happened to them anyway?) and early New Found Glory, the Jim Ivins Band are well on their way.

The band’s sound is reminiscent to many emo band beginnings with those wear-your-heart-on-your-sleeve type lyrics (see “Stages of Your Life”). However, the versatility is what branches them out and distinguishes the Jim Ivins Band from inhabiting just one genre of music. An example is “Two Hours Two Days Two Weeks,” which demonstrates more of a punk attitude than heard on previous tracks.

“Two O’clock Wake Up Call” is another must listen with solid guitar accompaniment and sing-along choruses while “Stages of Your Life” is a ballad that begins with soft vocals and guitar strumming.

Originally a solo project, Ivins recorded his debut full-length album in 2007. Soon after the band came together with the goal to make “catchy, accessible music with honest lyrics that are easily relatable.” And they’re doing just that.

Hard to place into one genre, the Jim Ivins Band is a promising Virginia-based band who have a bright future on the music scene. Just listening to the growth on their two EP’s is impressive. I’m excited to see what’s in store for them.

What do you think? Give them a listen on MySpace and let me know!