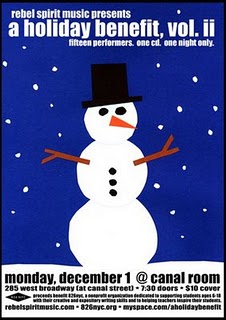 I wanted to let you know about an album release party and benefit concert I’ll be attending this coming Monday night and invite you to come along! This year marks the second annual concert and release of A Holiday Benefit, Vol. II, which will be held at the Canal Room in New York Monday night from 8 p.m. until midnight. I attended the inaugural concert last year where many New York-based musicians played and raised nearly $3,000 for 826NYC, a nonprofit organization dedicated to supporting students ages 6-18 with their creative and expository writing skills, and to helping teachers inspire their students to write.

Creator of the now-annual A Holiday Benefit series, singer-songwriter Benjamin Wagner, spoke to me last year about his concept for the yearly showcase and album release. Having been a creative writing major himself, Wagner talked of the importance that kids of all socio-economic backgrounds understand and develop writing skills.

Wagner explained that he was trying to provide a “think globally, act locally” concept, which is the idea he pitched to his fellow musician friends last year. You can read my write-up of the concert and more of my interview with Wagner from last year here.

This year’s show will feature 15 performers and showcase many tracks from the album. It’s for a great cause and will definitely be a night of amazing performances. Hope to see you there! For more information check out the MySpace page and Facebook event page.