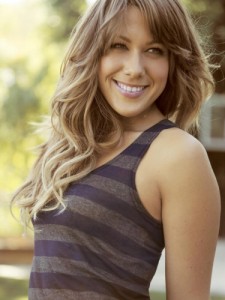 Colbie Caillat has had quite a year. Just around this time last year her first single, “Bubbly” hit airwaves and her debut album, Coco, was released. Previously, Colbie was known more as a MySpace sensation. She was MySpace’s No. 1 unsigned artist for four consecutive months acquiring over 100,000 friends, eventually landing her a record deal with Universal.

Fast forward to 2008, “Bubbly” and second single, “Realize” continue to be played in heavy rotation and Colbie boarded John Mayer’s Mayercraft Carrier cruise ship to join him and other musicians and fans for a fun-filled music cruise. Apparently all this didn’t keep the California native busy enough, as she just penciled into her calendar a US summer tour with Mayer as well.

Colbie took some time out for a phone interview while driving from Nashville to Iowa City right before the US leg of her summer tour began. Having just wrapped up filming in Hawaii for “The Little Things” — her third single picked by fans on MySpace — Colbie talked a bit about her stage fright, how she became a MySpace phenomenon and why she thinks “Bubbly” resonates with so many people.

To listen to Colbie talk about how her life has changed in the past year, writing songs in the bathroom and advice from John Mayer click here. For more advice from Colbie to aspiring musicians, MySpace and why she thinks “Bubbly” is such a hit, click here. Feel free to read the full interview below and check out Colbie’s MySpace for when she’ll be playing in your area!

It’s been just about a year since your debut album came out. How has life changed for you?
So much. A year and a half ago I was just working at a tanning salon and I was recording my album. Now, I’ve been to . . . I can’t even count how many different countries playing my music all over the word, living on a tour bus. It’s a lot different, but it’s fun.

Did you ever imagine MySpace would have had such a huge impact on your career?
Not at all. No, I had no idea. I didn’t even know what MySpace really was or could do. My friend made the page for me and told me about it and he helped me upload my songs and everything so I had no idea.

How did the whole process on getting your record deal come about?
Well, because I was on MySpace and was eventually on the top of the unsigned artist chart. I was No.1 and I was easily noticed by people and the record labels would notice me easily and that’s how they found me and then offered me a record deal.

You pretty much had your songs written before the record deal happened, right? Did you have a certain concept for the album?
Oh yeah, the whole thing was written. The label came into it a month and a half after we were already into recording the album. I wrote these songs and every time we’d go into the studio we’d add instruments up until when we felt like they were complete. I just wanted the music to sound good, laid-back and really pretty and uplifting and sunny and that was the concept I guess.

I read that you write songs in your bathroom.
Yeah. I do. [Laughs]. It sounds good in there. Usually when I was at home in my bathroom, I felt like no one could hear me because I was in my own little world. It echoes in there so it makes your voice sound pretty and your guitar has some reverb on it. And now, on tour, being in my hotel room I go into the bathroom and close the door because if I sing really loud, people can hear me down the hall. It’s my comfort zone.

Do you remember the first time you heard “Bubbly” on the radio?
Yeah. Well, the first time I heard it I didn’t really count it because we were on our way to that radio station. But the first time I heard it randomly, I was back home on a little break from tour and my family and I, we went out to lunch at this restaurant we always go to. Halfway through lunch, we were outside and “Bubbly” came on and my family of course started freaking out. My mom got up and started dancing. It was really exciting.

Are you tired of playing “Bubbly” yet?
There are times when I am. Usually it’s for TV performances because I get so, so nervous on TV that I always mess up the song and then I just dread singing it the next time. Lately, we just went back on tour a week ago, so now I’m actually excited to sing it again. I just need little breaks from it.

You’re starting up a summer tour with John Mayer, you must be so excited!
Yeah. I’m kind of freaking out. [Laughs].

Has he given you any words of wisdom about the music industry?
Yeah, he has. I met him six months ago and we were talking. I told him I have stage fright and lots of fears. So he just told me to have fun up onstage and not worry because anything you do up there, people laugh at. Even if you mess up they kind of appreciate it more. As far as making decisions, like business decisions, he just said to do what you feel and go with your gut so I do that and it works.

Has your stage fright gotten better over the past year?
It has gotten a little better, but it’s honestly different depending on the situation. If it’s not as big of a deal TV show I’m fine. If it’s Leno or The Today Show I freak out completely where I cry right before I go on. I do vocal warm-ups with my band before and breathing techniques and I have to remember to smile. Sometimes, depending what time of day it is, I will have a cocktail before I go onstage just to calm me down a little bit.

Your debut album, Coco, is approaching it’s year mark later this month. Are you working on another album?
Well, the third single comes out in August for “The Little Things.” We just shot the music video for that inHawaii a couple weeks ago. But yeah, I’m working on the next album. I’ve been writing for the past year and we’ve already recorded some of the songs. We’re not recording the full album until January and it won’t come out until next summer so we have a while to work on it still.

I know you worked with Jason Mraz on his most recent album. Are you hoping to collaborate with anyone on your next album?
I’m not sure. We haven’t talked about it for my album. I’ve done a song on Taylor Swift’s new album and Jason’s album and then a couple artists from different countries. I’m not sure about doing any on mine yet, but I would like to for sure.

Your fans have been included a lot on your MySpace, often picking the next single you release. Are you planning on continuing this for the new album?
That’s what I’m trying to figure out how to happen. I definitely want that, but I’m not allowed to put the songs up on MySpace. So now I’m trying to see, maybe having my band learn all the songs first and then we’ll start playing them randomly at shows, but that’s still not the best way to do it so I’m trying to figure out a way to do that.

Your songs were taken off of MySpace for a while.
There was some disagreement with MySpace and Universal. So everyone from Universal had to take either their songs off or put shorter clips. I was trying to fight that because as much as I want to respect my label, MySpace was what got me started and my fans, I felt like that was being disrespectful to them. There was a lot of negotiation, so I was able to put my original demos up for the meantime until the lawsuit passed.

What is your advice to aspiring musicians and singer-songwriters?
I would definitely recommend learning your craft, whatever it is. Take vocal lessons if you sing or piano lessons or guitar lessons, whatever instrument you want to play. Practice all the time because I didn’t and I wish I would have more now. I can play guitar and I can play up onstage, but I’m not a great guitar player so it kind of makes me nervous. So if you just practice your craft well so that you just have it in the bag. Write your own songs that mean something to you and just be in control of your career. As far as MySpace, make your page look all cute and post bulletins, keeping people involved in what you’re doing. That’s mainly the best thing, to keep them involved.

Do you have a favorite song on the album?
My favorite is “One Fine Wire.” Every time I hear that one come on I just like the melody and the music behind it, it’s just very uplifting. I wrote that song about my stage fright and how to overcome it, so that song just means a lot to me.

With MySpace, do you feel it’s more important to get fans that way rather than TV show appearances?
Well, it’s just different. My MySpace fans are the original ones that know everything about me. They know when I had all my original pictures up of me playing guitar in the bathroom, they were the ones from the beginning that heard all the demos. They’re different kind of fans than the ones that see me on TV. They [TV fans] become more of, I guess the screaming fans and the MySpace fans are the ones that are like, “I want to say that I’ve been listening to you forever.” They’re both different, but they’re both appreciated.

Why do you feel “Bubbly” has had so much success?
I think it’s because the song is about love. Well, it’s about having a crush on someone and all the things that I wrote about in that song, everyone has either experienced before, they’re feeling it right now or they’re dying to fall in love or have a relationship. I think by people being able to relate to a song, I think that’s what does it.

What would you be doing right now if it wasn’t for the music?
I was really into photography, so I would have tried something for that or I would have gone to school for interior design. I had fun with that, I was going to school for that a couple years ago. Otherwise, I’d still be singing and writing songs, maybe for other people.

If you haven’t yet, to listen my interviews with Colbie click here for part one and here for the second half of the interview. Check out Colbie’s MySpace for more info. on upcoming tour dates and music!

annie this is so cool that you won the tickets! sweet interview, keep up the great work!

I like the fun fact about her singing and writing in the bathroom – great job doing your research! This is my favorite interview so far!

hope some1 of Colbie's friends are reading this message,i just made a song for you,i wanna sell it,im not 1of your biggest fans,you have a sweet voice by the way.sometimes i listen to your music,& i know the song i can give to you is your style and style of your musicians its a nice song if you want to know more about this and you are interested you can contact me.

[…] read the full transcription click here. Be sure to visit Colbie’s MySpace to listen to tracks off Breakthrough. August 26, 2009 | […]