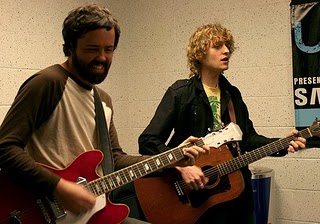 Army of Me guitarist Brad Tursi took some time out to chat with me after their performance on the “Get a Life” tour. He filled me in on how he came to join the band, what made him pick up guitar and (for the ladies) how it IS possible to maintain a relationship while being on tour. For all you skeptics out there, Brad shed some light on how he makes it work. Now whoever said dating a guy in a band is a bad idea?

How did you get involved in Army of Me?
I was in a band called Ki: Theory before this, from , and we were on a couple bills together. I got to talking with Vince and our band was in the process of breaking up. Vince had contacted me a few weeks before I left Ki: Theory and he asked what I was doing. They lost their guitar player, and he asked if I would be interested in playing with them. I said, “I’d love to help you out, but I’m in this other band.” I loved them [Army of Me] I thought they were awesome. Before I was in this band I bought their CD and I was totally rocking out to it before I was even in the band.

I just said, “I’d love to help you out, but I can’t do full time.” And he said, “Well, we’re looking for someone more full time.” So I said, “Okay, if you ever need anything give me a call.” Right after we had our meeting for Ki: Theory I kind of decided it wasn’t happening anymore. I checked my email right after that and there was a message from Vince saying, “Call me up, I want to talk to you.” So I called him up directly after and then I went up there and did a little audition for them. I practiced their songs to their CD and I went up to D.C. that week and played with Vince. I went straight from one band into the next. I’ve been with them almost five years now.

How would you describe the band dynamic?
There’s a difference. Sometimes you’re in a band with your high school buddies and you’re friends first and then you’re in a band. In this case, I met the guys in Army of Me, I didn’t know who they were. It was music first and then you figure out who everyone is. They’re all great friends of mine. Obviously we get on each others nerves. You spend 24 hours a day with someone, sleep in the same bed as them, you’re bound to know everything about them and they know everything about you. I think we kind of went through a very volatile sort of time. I feel like now, we don’t really go there that often, but even when we do it’s just like, forget about it afterwards. If you hold a grudge you’re going to be miserable. You can’t get away from them. You just learn to respect everyone’s space and get along as best as you can.

What made you decide to pick up a guitar?
I think it was Slash from Guns N’ Roses. I used to have little pictures cut out of Hit Parader and all those magazines pasted up all over my walls of Guns N’ Roses. That was my first concert. I went with the church youth group to a Guns N’ Roses concert. I don’t think the priest really knew what he was getting himself into. It opened up with “Welcome to the Jungle.” “Do you know where you fuckin’ are? You’re in the jungle!” The priest was like, “Uh-oh, what did I do?” They were definitely a big influence.

I found an acoustic guitar in the attic, it was my dad’s who actually played in a band, I came to find out later, with Steven Tyler from Aerosmith when they were in high school. I don’t think any of the original people in Aerosmith were with them at all. They just played in high school together. Maybe there’s some rock in my roots there somewhere. It was just one of those things where once I picked it up, I never stopped playing it. I never got bored of it. I’d just play it all day, every day. Something about it just stuck with me.
Is it possible to have a relationship while on the road?
It is possible. It’s definitely difficult and there needs to be a certain, sort of girl. They have to be, number one, confident in themselves and confident with you that you’ll be faithful to them. If they’re not confident in themself then they’ll always be looking for reasons that you may be doing something to get away from them. And just someone that’s understanding and also someone that has their own life. You can’t have a girl that’s just sitting home, missing you and not doing anything because most likely, she won’t be able to handle it. You also have to love each other a lot and you have to be sensitive to their needs. I don’t want to lose my girlfriend because of this band. So, certain times, you have to make a decision to see her and not play a show. Just be conscientious and hopefully it works.

Do you change up your guitar solo every night?
I try to switch it up. I think inevitably, when we first started extending that section in “Perfect” it was fresh, it was really, truly I was improvising because I hadn’t done that song many times. After you do something enough times you start to fall into some sort of repetition. I sometimes struggle with that because the bands I used to play in, we improvised a lot, so there was always a freshness to the songs. With this sort of style, a lot of times we’re playing the same songs. It’s good because it makes the set polished and the people that are at the show every night, they don’t know that you played it just like that the night before. I’m just trying to get used to that. Even though it’s the same show, you put on the best show you can every night because the crowd is hearing it for the first time, even though you’ve heard it a thousand times.

What are your hopes for the next few years?
I’d like to make a new record and I’d just like to be in a place where we can support ourselves doing this. My childhood dreams of fame and fortune are over. Fortune would be nice [laughs]. I just want to be able to play music that we want to play and hopefully be able to make some sort of living doing it. Maybe I’m getting old, I don’t know.

Do you have another job back home when you’re not touring?
Yeah, you just try to do whatever you can. I’ve helped friends paint houses or put in windows. I helped my dad with his car business, I work temp jobs, stand on the street and beg. No, I don’t do that [laughs]. You know, you just do anything you can. You just gotta find a way to make some money. I haven’t paid rent in four years. That’s pretty impressive for a guy who’s 28 years old. I’ve been fortunate, I’ve stayed at Vince’s for a while. A friend of mine let me stay at her place for a while. I’ve been staying with my father for the past few months. We’re gone for so long, I’m just throwing money down the drain if I’m paying rent. It’s just not normal existence.
Do you have a favorite show or venue you?
??ve performed at?
T
here have been obviously a lot of good shows and I’m sure a lot of good shows that I just don’t remember that were great. The one that always sticks out in my head was a Blue October show, or . It was the winter time, we were in Florida and it was 75 degrees so it was nice to be outside. To me, that was the best the band has ever sounded. Just really a great show, great crowd, good energy. The sound was amazing, the band was really in a great grove and it felt good. I felt excited to play. The connection was made with the crowd and the people in the band. All the intangible stuff came together.