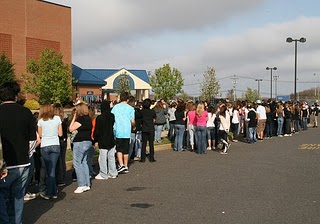 Growing up during the height of the boy band era and attending all their concerts (you name it, Backstreet Boys, 98 Degrees, N’Sync I’ve been to them all) I’ve always wondered what it’s like being on the other side. Not the fan waiting anxiously for the doors to open to get that perfect spot right by the stage, but to be behind the scenes. Whether it be the crew, security, or the band itself, that life seemed so much more exciting to me. 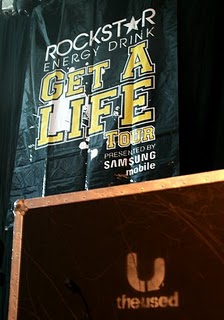 This past weekend I got to be on the other side of concert life when I toured with Army of Me for two of their concert dates on the “Get A Life” tour with The Used, Straylight Run, Street Drum Corps and Lights Resolve. The movies make it all seem so glamorous – sex, drugs, and rock ‘n’ roll. The groupies, the parties, the unlimited highs (whether it be natural or drug-induced) of the touring lifestyle. I learned this weekend that touring isn’t all what it’s portrayed to be in the movies. Sure, it’s a lot of fun hanging out with new people and different bands and I’m sure nothing beats that feeling when you walk off the stage after putting on an amazing set, but it’s also a lot of hard work – physically, mentally and emotionally. Often, you’re traveling in a small van, packed in with equipment, suitcases and whatever else you may need for those months on tour and sometimes it can start to smell as half eaten food and dirty clothes add up. Going from hotel to venue every day can get tiresome and the downtime between unloading and performing seems like an eternity. 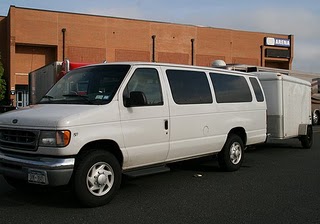 Regardless, being in a band is a full-time job in itself. Whether it’s practicing for a show later that night or writing new music, it’s another way of life and band members have to make a living too. Contrary to popular believe, they are “real” people and have to eat, pay rent and bills. Who knew?! In a way though, being on tour seems like an escape from the so called “real world.” These people are doing what they love each and every day – performing, traveling, meeting fans and my experience was almost surreal. I tried to take in as much as I could and lucked out because all the guys in each band were so nice and down-to-earth. I was able to interview everyone from Army of Me as well as Jeph from The Used on their tour bus (don’t worry, there are pictures coming too!) I’ll definitely be posting these interviews in the upcoming week . . . not sure how much I’ll actually transcribe for you to read though, but I’ll try my best. Pretty much all of your questions about touring, groupies, and performing were answered so stay tuned for the interviews! 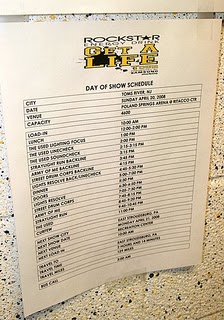 Annie, you’re a rockstar!! I love how your blog is developing–so impressed. Keep it up 🙂