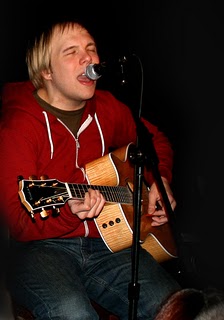 Marking almost the ninth-year anniversary of the release of album Blue Skies, Broken Hearts . . . Next 12 Exits, frontman Kris Roe of the Ataris has embarked on a massive tour playing the album in it’s entirety as well as fan favorites from previous albums. Having recently finished up touring the West Coast, Kris is touring everywhere from New Jersey down to Florida back Midwest to Michigan and Illinois before traveling to South America and Japan.

His almost one-hour set began at 11:30 p.m. with first track on the album, “Losing Streak.” “This is a sing along show so I hope you all sing along,” Roe told the audience at Maxwell’s in Hoboken Friday night.

I’ve been to many concerts over the years, but none quite like Roe’s acoustic set Friday. He had practically every person in the room singing along word for word to each song played that night, something I’ve never witnessed at a concert before. Granted, those in attendance seemed to be die-hard fans, making up the standing-room only crowd. With such a good crowd, for hit “So Long, Astoria” off of the album of the same name, Roe got off the stage and walked into the crowd while playing the song on guitar. Instead of singing it himself on stage with his microphone, he let the audience take over singing the song. Possibly the highlight of the night, those in attendance demonstrated that the Ataris’ fans are far from extinct.

Playing a 17-song set, Roe had so much energy and you could truly tell that he was having just as much fun as his fans in the audience, joking along with them and playing any song they screamed out to him. Crowd favorite seemed to be “San Dimas High School Football Rules,” as loud screams from the audience could be heard when he started playing the first chord of the song. A solid guitar sound, Roe helped peak the crowd’s energy. 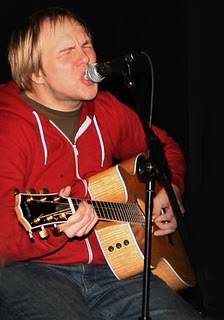 Afterwards he told the audience, “This is a really sappy album I wrote 11 years ago,” before beginning song, “I Won’t Spend Another Night Alone.” With classic lyrics like, “The things you make me wanna do/I’d rob a quick-e-mart for you/I’d go to the pound and let all the cats go free/Just as long as you’d be with me” he got the point across. Roe sang part of the chorus, then told the crowd, “Alright now, just you guys. Ready? Sing aloud” as all in Maxwell’s sung in unison “I won’t spend another night alone.”

He introduced the next track, “The Last Song I Will Ever Write About A Girl” as being “a complete fuckin’ lie, which I’m sure you all realized by now.” He ended the song explaining that he was 19 and angry when he originally wrote it. “Broken Promise Ring” Roe wrote when he was 14, while joking to the audience, “If it sucks don’t blame me.”

Roe explained that many of the songs he’s been performing on this tour from the album, Blue Skies, Broken Hearts . . . Next 12 Exits have never been performed live before, like last song on the album, “In Spite of the World.”

The last few songs played were from previous albums. He played “I.O.U. One Galaxy” as well as “In This Diary,” “So Long Astoria” and last song of the night, “Summer Wind Was Always Our Song.” Roe’s solid guitar and vocals throughout the night blew me away and sounded even better than on his albums, a feat not many musicians can accomplish.

Half of D.C. based band Army of Me opened the night with a 40-minute acoustic set with frontman Vince Scheuerman alternating between guitar and piano and Brad Tursi on guitar. They played nine songs, mostly off their debut album, Citizen. 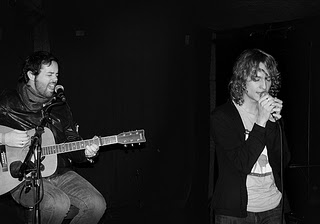 “Meet You at the Mouth” opened the night with strong vocals and guitar while second song of the night, “Saved Your Life” slowed down their set a bit. Vince and Brad played to a packed room, combining solid vocals and guitar features throughout their set.

In addition to songs from their latest album, they covered a song by Detroit-based singer Brendan Benson as well as played a new song of their own. Before playing piano-based song, “Better Run,” Vince explained that while Army of Me is a rock band, they recently started playing piano at their gigs. Vince started out the song solo on piano while Brad accompanied him with light guitar picking soon after. Army of Me had the audience helping out with their next song, a new one for the guys, clapping along to keep the beat of the song. Brad kept telling the audience, “This is a rock song, you guys are the rock.”

Vince explained their second to last song, “2 into 1” as being “a song about unity and love” and then ended their set solidly with emotional song, “Rise” a little after 11 p.m. 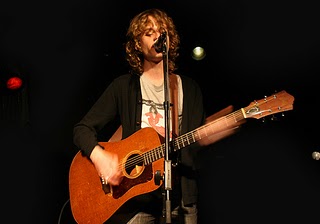 Be sure to catch Kris Roe on the rest of his “Blue Skies, Broken Hearts” acoustic tour. Check his MySpace for future tour dates.
For more on Army of Me check out their website.

Man…I give you some comedic gold at the end of that show and I can’t even get quoted? Harsh, if not mean. It’s ok though, I’m not that upset.