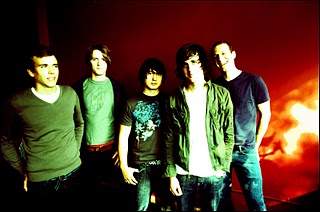 Take four friends from high school, add a college roommate to make the band total five, mix in a recent record deal, touring Thursday through Sunday to keep up with classes and you get the current life of Sparky’s Flaw. Frontman Will Anderson took some time out on his way to class for a phone interview and told me all about the band, their album plans and the story behind the band’s name. Listen to the interview here.

Tell me a little bit about Sparky’s Flaw. I read that four of you were friends growing up, did you always want to start a band together?
We were all best friends in high school – the four of us – and then our drummer actually started a band with a couple of guys and we all got really jealous. He was our friend and he was playing for this other band. We all played instruments, I played guitar and the other guys play, some of them played or just picked it up for the sake of joining the band. We decided despite our drummer, who was in this other band, we were going to start a band and then he decided he wanted to join our band so it worked out well. We played all through high school, tried to play as much as we could around town. Then we got to college and met our great guitarist, who was my best friend going through college. I’ve known him all four years so it worked out well.

So are all of you in college?
Three of us go to school. Two of us go to , myself and our guitarist, and two of the guys are not in school and the other one goes to Mary Washington which is about an hour up the road.

How do you deal with prioritizing school, touring and working on your record?
That’s a great question. We’re still trying to figure that out. I’m going to class at and then we leave for at so I’m going just so I can get the check saying that I was here. We missed a week of school going to L.A. recording our CD. It’s a struggle, but we’ve all sort of gotten the hang of it. And the teachers are pretty cool when we tell them what we’re doing. They seem to live vicariously through us, so we just show up and let them know what we’re up to.

So you just signed with Mercury Records and you’re working on your first album, how is that going?
We’re working on it right now. We’re halfway through with it. We did basically six songs over our winter break and we’ll finish up the rest of it this month and then over spring break through the big chunks of free time that we all have at the same time. We will go back to L.A. the first week of March and knock it out.

Do you have a name for it yet?
No, we haven’t really thought of it. We still have the other six songs to choose. We don’t even know what songs we are going to do yet. We’ll figure that out when it comes, but definitely nothing yet.

Do you have a tentative release date?
It’s supposed to come out in the summer I think. Sometime in the summer, I don’t know when.

What can fans expect from it?
Its cool. Its rock, its very rock. Its rock with pop twists and soul. We’re still honing the sound, trying to get some continuity to it. It’s definitely rock ‘n’ roll, but it’s good. I think they’re catchy songs and they’re fun to listen to. We’re just trying to have fun and hopefully when they listen to it they will too.

I read that your song, “The New Year” was featured in the Rose Bowl. How did that happen?
Yeah, it was crazy. Our managers got an email from ESPN saying “Hey, we like the song and we want to use it in the Rose Bowl.” We didn’t really think it would actually happen but yeah, we were all watching the Rose Bowl and there we were. They played it during highlight reels and stuff. It was pretty crazy because we had no idea it was coming and thought it was a passing thing and it wouldn’t follow through. We were all watching at home in the off chance that it would and it did. It was sort of out of nowhere. It was a good boost of encouragement.

Since you write all the songs, what is your typical writing process like?
I have a really weird sleeping pattern so at I’ll start writing songs. Actually, I sit down and write every night because it’s a good habit. Ninety-five percent of time it’s stupid stuff that I write and I usually give up after about a half hour. But on a night that something good does come up it’s one of those all-nighter things where at 5 ‘o clock in the morning I’m banging on our drummer’s door, screaming, “I got a good song, listen to this,” and wake him up and make him listen to it. It’s usually an all night sort of trance thing where I go into the zone and knock it out as quickly as possible. Often times I’ll come out with it and come back and rewrite all the words in a few weeks once I realize how terrible the idea was. Usually the music comes first and lyrics come later. But you definitely know very quickly if it’s a good song or not.

I’ll have the entire song laid out, the lyrics and the melody and then the guys will add their opinions to it. It’s just a matter of they add their little twist to it eventually. But I usually come in with a full song ready.

Where do you find the inspiration behind your songs?
Everywhere, really. Often times, if it’s about somebody I’m very specific about who I’m writing the song about. If I meet somebody interesting or hear an interesting story about somebody usually that’s a big one for me. And then sometimes just fiction, and random things that I think about.

I really like your song, “Under Control.” What was going on in your head when writing it, what inspired it?
That’s a funny song. I used to do this thing where I’d advertise, ‘cause on the east coast sororities, especially in the south, are huge. So to advertise for shows I would go into sororities and sing to the girls. It’s like 130 girls, college-age, it’s the perfect age – who we’re shooting for basically. I wrote that song with the melody and I had this crush on this girl for probably about three years all through college. She had no idea who I was. So, I wrote that song in the off chance that she would hear it and realize it was
about her. But unfortunately,
she did not and she still does not know who I am. It’s kind of weird. I don’t think she has any idea that she has that song written about her. It was definitely for that one girl who I met at that one sorority and who I still see all around and she went to that school.

Is your band really named after one of your friends, Sparky?
Yeah. When we were in high school there was this kid who we called Sparky and he was a cool kid, he used to wear tailored suits to school every day so he looked really good every day. The only problem was that he also wore duct tape shoes to school every day. So that was his only flaw. We were desperate for a name and we came up with Sparky’s Flaw and it sort of stuck.

How would you explain your music to someone who’s never heard it before?
Its catchy songs, but its rock and roll and soul.

Do you have a favorite song to perform?
“Under Control” is probably my favorite song to play. We do some cover songs, “Under Pressure” by Queen. Our saxophone player and keyboardist sings it, it’s an incredibly high song so it’s fun to watch him sing it while I get to sit back and not do anything.

What are your plans for the rest of 2008?
We graduate in May. So we’ve been doing Thursday through Sunday touring. It’s crazy, but we’ve been doing that this semester so far. The moment we graduate we’ll hit hard and I don’t know who we’ll tour with. I know they have names in mind but I don’t think we can confirm them. But we’ll definitely be out all summer and through the fall and hitting it hard. Which is fun, we’re excited about that.

For more info on Sparky’s Flaw, be sure to check out their website here.

I read this article
here