I’m a strong believer that if you want something bad enough you’ll make it happen. Of course hard work, persistence and luck are usually the ingredients to success but sometimes it’s also timing. Being at the right place at the right time, or just having faith that things will work out. This all pretty much sums up my career as a music journalist. When I started this blog nearly seven years ago I never dreamed it would take me all the places I’ve been. I especially never thought I’d be covering an awards show, but I certainly hoped I’d attend one at some point in my lifetime. Lucky for me, it was this year and the Academy of Country Music Awards in Las Vegas last weekend. Below are my Top 10 moments of that experience. For all the photos, you can follow me on Instagram.

I have never been to Las Vegas and for the longest time, the only reason i wanted to go was to see The Venetian in person and pretend I was back in Italy. I got that wish, but it was even better than I could have imagined. I rode on a gondola while interviewing Dustin Lynch! If that was the only thing that I accomplished while there it would have been enough. 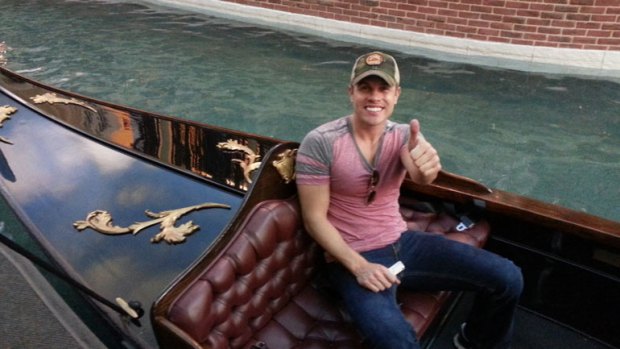 I’ve covered a few red carpets before in New York and they were nothing compared to an awards show red carpet. Everyone was dressed up (including myself!) and I had butterflies the hours leading up to it. I already planned my standard three questions, but my nerves were getting the best of me, until it started and I realized how many friendly faces there were. Half of the artists that came by I had already met and interviewed, which helped calm my nerves. When I told Will Hoge of my worries, his advice: just be yourself. Which I did and luckily, the artists all remembered me which made it even easier.

For as long as I can remember, my dream was to attend an awards show. To sit in the audience and take in everything that was happening firsthand. In reality, it was more like a concert event than awards show with all the performances. During the commercial breaks, we’d see artist EPK’s on each new single, album, tour and best of performance moments from previous ACM Awards. Witnessing Merle Haggard come onstage and accept the Crystal Milestone Award, seeing George Strait perform in person for the first time and accept the Entertainer of the Year Award, it can’t get any better than that!

Talk about butterflies. I know I shouldn’t have crushes on musicians, but this guy is special. I don’t think I’ve listened to any country album more than his debut, Up All Night. My alarm every morning is set to his song, “Hey Pretty Girl.” While I’d never admit I’m obsessed, I am pretty infatuated. He’s just an incredible songwriter and someone I admire. Interviewing him only further proved this because he was so humble and almost uncomfortable talking about his nomination for New Artist of the Year. He also gave me some insight into his next release, which I can’t wait to hear later this year!

He’s another one of my favorites and a friendly face throughout the weekend — backstage and on the Red Carpet. He is always one of the most fun guys to interview. Maybe I’ll even go shark diving with him…

I can’t believe this even happened. On Monday, I attended the TV taping for a special to air on CBS called ACM Presents An All-Star Salute to the Troops. The first performance of the night was George Strait and Merle Haggard playing “The Fightin’ Side of Me.” Two legends I never even dreamed of seeing live in the same room as me. It was truly mind blowing.

Of course I was hoping to run into Taylor Swift at some point during the weekend, but this never happened. (There’s always next year!) I did attend her record label’s ACM party though where I chatted with Rascal Flatts, Eli Young Band and The Cadillac 3. Believe me, I was pinching myself. Having interviewed Rascal Flatts a few months prior, it wasn’t difficult to go up to the band but for some reason I was super nervous to approach Eli Young Band. Their single, “Even If It Breaks Your Heart,” is one of my all-time favorite country songs and one of the songs that kept me motivated as a freelancer when I constantly questioned my ongoing struggles in making my dream career work out. When I told my colleague this, he told me to go tell them. And I’m very glad I did. So sweet and humble, when I told one of the guys this he thanked me profusely and confessed that he often feels like the band is country music’s underdog. I’m not quite sure why and I told him this because I always hear their songs on the radio. It’s interesting to learn band’s perceptions on themselves and to find out that even country stars can be insecure.

“I hear you’re a songwriter,” Chris Janson said as he approached me on the red carpet. I was speechless and didn’t know how to respond. I still have never written a complete song. “It’s a simple question. Yes or no,” he said. To which my colleague urged me to say yes. “Sure, I guess,” I responded note even able to convince myself. It’s my dream to write a song (and his publicist knew this) so when I landed in New York, I signed up for a songwriting class. At least the next time someone asks me I’ll be more certain in my answer.

I couldn’t help but feel like I was walking on a movie set while in Las Vegas. My last day there I was able to take in the sites, walk past Italy, France and pretty much every major city imaginable all on the same street. It was surreal.

Sometimes you just need to ride a roller coaster that’s in your hotel. It was actually terrifying! I stayed at the New York New York, ironically, and there is a roller coaster that starts at the top of the hotel and ends inside the hotel. It was something I never imagined seeing before. I also took a 30-minute trip on the new 550 ft Ferris Wheel at the Linq Hotel where I got a view of the entire city. To me, these rides were better than gambling…at least I knew where my money was going!