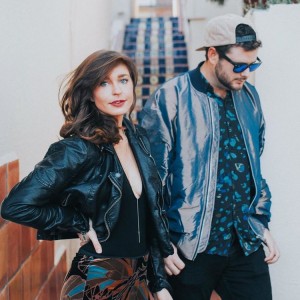 Songwriting Session is a column that goes behind-the-scenes with artists and songwriters. Each Sunday, a new songwriter will share their journey and provide lessons they’ve learned along the way. This week, Taylor Baker of The Wild Now shares what she has learned as a songwriter.

Taylor Baker and Drew Walker first met while watching Local Natives play a set at SXSW in 2013. Shortly after, the two musicians began writing songs together and formed a duo called Taylor & the Wild Now. In 2016, they changed their name to the Wild Now and charged full speed ahead playing shows and recording new music.

Their latest five-song EP Afterglow, released on Friday (May 19), showcases a new sound for the band as the duo have embraced the trumpet within their recordings. In an interview over the phone from her home in Austin, Texas, Taylor discussed the band’s evolution and shared some insight on songwriting and how she battles through the difficulties of writer’s block.

On Afterglow, Taylor says she and Drew made a conscious effort to transition to a newer sound. While it’s still the indie-pop music fans know and love, she says their songs have matured as they continue to push boundaries and themselves out of their comfort zone. One song in particular, “Tongue Tied,” shows this evolution. Drew wrote the instrumentals for the track and Taylor explains that it was this song in particular that prompted the decision to add trumpet features over the guitar parts and production.

“We really wanted it to be a song that people could listen to and escape,” Taylor explains. “It’s about letting go and living in the moment.”

While Drew writes the majority of the music first, Taylor will then add lyrics and melody to the song. She admits that lately she’s been having difficulty feeling inspired and her favorite songs are the ones that flow out of her. When she’s dealing with writer’s block she tries her best to sit down with her guitar and write, but not have too many expectations.

“I feel like when I put more pressure on myself then it’s stressful and nothing good really comes out of it,” she shares. “I’ll carry around a notebook, write down lyrics when they hit me and quotes that inspire me that I could maybe add to a song. Sometimes if I really feel stuck I’ll learn a cover of another song that I love, just to get ideas.”

Taylor says she always tries to write from an honest place. It’s advice another songwriter gave to her and something she has taken to heart, noting that the most popular songs are often the most relatable. Since she and bandmate Drew are currently dating she admits that this can sometimes be hard.

“I’m always in my head and [my] thoughts are all over the place. So, when I write, I discover the meaning after the fact and then I’m like, ‘OK this makes sense that I wrote this song,’ when at the time I wouldn’t really know exactly why,” she explains. “Me and Drew, my guitar player, we’re dating so I guess in some ways that does give me pause when writing because I don’t want to be too honest.”

The two songwriters never ask each other too much about the stories behind their songs and instead focus on writing the best song they can for listeners. Taylor describes Drew’s music as peaceful and beautiful, noting that some tracks have a more beachy vibe to them.

“It’s music you could listen to all the time,” she adds.

Their new single is “Afterglow” and Taylor says it’s the most unique track on the EP. Her airy vocals are accentuated by Drew’s musical production and she says the song hints at the direction their band is moving toward. Music fans will get a taste of this transition on the band’s current tour, which runs through June. The duo are set to play Austin City Limits in October and the Austin natives hope to connect with those in attendance.

“When I see somebody live, I get a connection more with the music than if I were to just listen to it [on a recording]. As a singer and being in a band myself, I love to watch their stage presence and get ideas of my own.”

Taylor says her favorite song to perform these days is “Run For Your Life.” Watch the music video for the song and stream their new EP below. For more on The Wild Now and upcoming tour dates, visit their website and follow them on Instagram.

The band is set to play Nashville on May 25 and May 26 at Cobra and The 5 Spot respectively. They head to New York on May 29 and May 30 to perform at Pianos and Rockwood Music Hall.