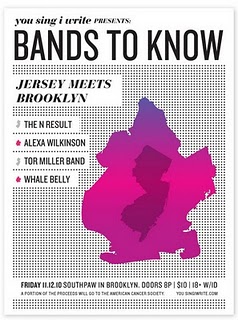 Just wanted to post a friendly reminder of my three year blog anniversary/site relaunch concert on November 12th at Southpaw in Brooklyn! Wendy sent me an amazing flier that I plan to start posting around Brooklyn, so feel free to grab it and do the same.

Since it’s just two weeks away, I’m taking a hiatus updating the blog in order to make sure all the content is ready. Be sure to follow me on Twitter for my up-to-the-minute adventures.

With a solid mix of hip-hop, folk, rock and pop artists, November 12th proves to be a fun night of music. Feel free to RSVP on Facebook. Complete details are below.

Hope to see you there!

Related Links:
• I’m Not A Groupie: A Music Lover’s Tale of Getting That Interview
• YSIW Celebrates Two Years!
• I’m With the Band
• Top 10 Interviews 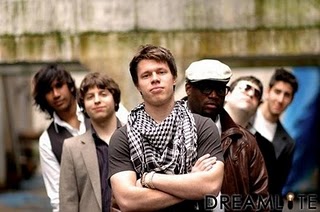 I am beyond excited to announce that my site redesign will be complete next month! Wendy Hu (photographer and designer extraordinaire), Joel Brower (programmer guru) and I are working hard to migrate all the content and have the site fully functioning for my 3-year celebration November 12th at Southpaw in Brooklyn.

Since it’s just under a month away, I’ll be posting less frequently in order to make sure all the content is ready so follow me on Twitter for my up-to-the-minute adventures. With that said, feel free to read through past interviews (on the right sidebar) and I’ll be back from time to time because I can’t stop writing altogether!

I can’t wait for my big bash November 12th. I’ve been putting together shows for the past two years, but this year is by far the most diverse lineup and showcases bands you NEED to know! We have a solid mix of hip-hop, folk, rock and pop artists that I really think you’ll dig. Stay tuned for the official flier and for more info, check out the bands who will be playing below!

Watch Tor Miller Band perform a cover of Ray LaMontagne’s “You Are the Best Thing” at last year’s bash below. Maybe I can make another request for it this year. What do you think? Hope to see you November 12th! 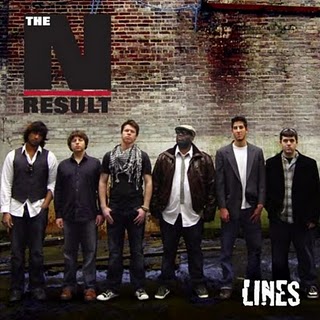 The N Result blend rock and hip-hop for a truly unique musical experience. Bringing to mind the Black Eyed Peas with their alternating singing and rapping style and catchy hooks, the six-piece band crosses multiple genres. Having opened for Ryan Leslie, Motion City Soundtrack and Pharrell Williams of N.E.R.D. and currently receiving quite a buzz by music fans and record executives alike, The N Result are well on their way.

Their soulful, danceable tracks demonstrate their versatility and it’s hardly a surprise to learn that lead guitarist Dan Bascom studies jazz while drummer Nate Sankary is a prolific classical musician. Not to mention, MC Chase Innis’ catchy rhymes have led him to share the stage with Grammy Award-winning hip-hop artist Speech of Arrested Development. And that’s only half the band.

Lead singer/guitarist Ross Lippencott has released three independent solo albums and currently studies music at Rutgers University while keyboarist Eitan Levine combines jazz and funk for a truly fun experience and bassist Bobby Tarantino doubles on acoustic upright bass at venues like the New Jersey Performing Arts Center and WBGO 88.3 FM in Newark, N.J. A band of All Stars isn’t too far from the truth.

The band’s debut album, Lines is a solid release of 12 high-energy songs. Starting off with upbeat track “On My Shoulders,” the listener quickly realizes the depth to The N Result. Singer Lippencott and MC Innis trade lines back and forth throughout the album at an enjoyable pace while each song mixes catchy beats alongside their vocals. Slower tracks like “Complicated” showcase the band’s continuing versatility while “So Unsure” has seductive Latin roots accompanied by light percussion, guitars and keyboard. Title track, “Lines” is undeniably catchy and will no doubt have the listener tapping along.

The N Result recently won a Taylor Guitars and Elixir Strings contest where they were awarded recording time at a marquee studio. Watch their video submission below and for more on The N Result, check them out on MySpace and catch their show this Saturday at 10 p.m. at Crash Mansion in New York! (Flier below) 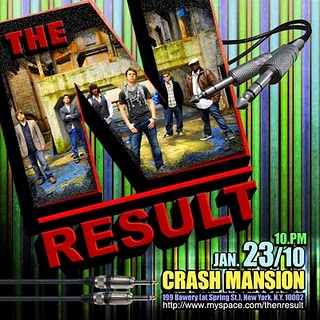