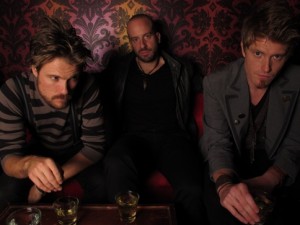 Currently readying their debut major label release, I chatted with The Kin after a recent performance in New York to talk musical robberies, their upcoming self-titled album and what they liken their music to. Made up of brothers Thorald and Issac Koren from Australia and New York drummer Shakerleg, the guys filled me in on just what to expect from their new music and Rockwood Music Hall weekly residency.

“[Our album is] going to be a real mix of everything we’ve written in the last year,” Issac said. “We took a year to stay in New York and play every week at Rockwood. We just wrote as much as we could.”

Playing every Thursday at Rockwood Music Hall at 9:30, their weekly residency allows the band to test out new material on the audience and see the crowd’s response. “It’s really helpful to see what people think,” Issac said. “We’re really proud of it. We’re really excited to get the songs to people.”

As far as their decision to play at Rockwood, Issac said the venue is “just so human.”

“People come and go and the sound is good. It’s inviting,” he said. “Great music comes in and out. We feel like a part of a happening. That’s what New York is about: pockets of community. The Kin is all about that. It’s about finding a tribe. Rockwood promotes all of us for that.”

Thorald further shared the band’s wishes for their new album.

“We’re hoping to make an expansive amount of fans that don’t know us yet. They can expect explosive, fun, dirty, pretty songs. We just want each song to be an experience,” he said. “The album’s going to bring out the voices and uniqueness of the drums and hopefully it’s going to translate [our live show].”

The album is due for release early next year, but the band’s upcoming single “Gemstone” can be expected in October.

“It’s certainly the closest to a live, driven album,” Issac said. “Now we’re listening to them, what could be the songs on the record. We had 50 now it’s down to 25. It’s virtually like giving away your babies.”

“We let the audience at Rockwood decide,” Issac confessed. “The songs that get the most requests and the ones they demand us to play again.”

But that’s not the only reasoning.

“A song not only has to be strong but has to sound great on a recording,” Thorald said. “Some we love playing live but haven’t translated on the recording.”

When the Kin aren’t busy putting the final touches on their album they take part in something they call musical robberies where they take their show to unexpected patrons at restaurants throughout the country.

“It came out of our love of fun robbery movies and thieves and Shakerleg’s subway days when he’d rally people around his drumming,” Thorald said. “I think we came out of it with a fun idea. It was a way to catch people when they were a little bit scared and play with their senses a little bit. That’s something we’ve always loved to do.”

The Kin alternate between what they call musical robberies and musical heists.

“You can either do a real robbery where no one – not even the owners of the place — knows and we get kicked out,” Issac said. “Or it’s an inside job which we call a heist where the owner coordinates it. The patrons don’t know so it’s a heist.”

Drummer Shakerleg had a whole other way of explaining things.

“I think what we’re trying to accomplish in a live show is that feeling that you get when you step on a piece of gum and you can’t get it off and you’re actually happy that that particular piece of gum is on your shoe,” he said. “That’s the sound we’re going for.”

Catch the Kin live in New York every Thursday through September at Rockwood Music Hall. 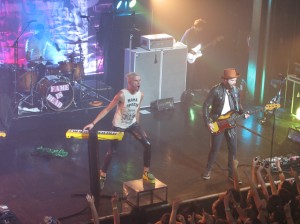 July was a month of many live concerts for me. Here’s a breakdown of 5 of my favorite acts to keep on your radar.

I caught Neon Trees’ sold-out set at Webster Hall earlier this month and can’t remember seeing a band rock this hard in quite some time. You might recall the band’s catchy breakthrough hit “Animal.” Having recently surpassed one million downloads for their latest single “Everybody Talks,” the band is poised for arena stardom.

Frontman Tyler Glenn had the audience captivated throughout the entirety of their set. Whether he was telling quirky stories about his songs, dancing in circles while swinging his mic chord around his neck, or stage diving into the audience only to crowd surf his way back to the stage, he sure knows how to work a crowd.

I admit I was a bit skeptical before attending Conor’s industry showcase a few weeks ago. Dubbed by some as Britain’s Justin Bieber I wasn’t quite sure if this pop act would hold up. Turns out he did. While his dance skills aren’t quite on par to Bieber, his latest single “Vegas Girl” was stuck in my head all night.

Nominated as one of Rolling Stone‘s Women Who Rock acts, Delta Rae proved just why they were selected at their Bowery Ballroom performance. Spot-on harmonies, electric guitar features and foot-stomping rhythms impressed and they had the entire room silent during their more stripped down and poignant ballads.

After seeing The Kin perform before Lights Resolve at Rockwood Music Hall last month, I knew I had to witness their entire set. Made up of two brothers from Australia and a New York subway drummer named Shakerleg, their story is intriguing. Brothers Thorald and Issac Koren have an uncanny sense of channeling and interpreting each other and with that each song embodies impeccable harmonies.

the Head and the Heart

I’ve lived in Brooklyn for two years now but have yet seen a concert at Prospect Park, until last Friday. When my co-worker told me the Head and the Heart were playing a free show I knew I had to go. And I’m so glad I did! I’ve been hearing good things about the band for years but never got a chance to see them live. I loved how they alternated singers throughout their nearly hour set, having concertgoers always surprised at what would come next.

What shows have you seen this summer? Any recommendations of acts to catch live? Let me know in the comments!