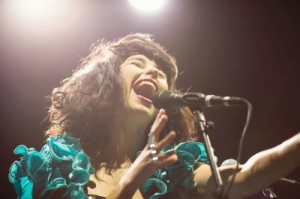 Long before Kimbra met Gotye she was a huge fan of his work. The self-proclaimed “fan girl” covered his songs at bars in Australia. After meeting him through her producer, Gotye called her up to see if she’d be interested in singing on his song, “Somebody That I Used To Know.”

“And the rest as they say is history,” she told me earlier this year.

Last night that very track was recognized at the GRAMMY nominations concert for Record of the Year and Best Pop Duo/Group Performance. When asked if she thought the song had a chance to be nominated Kimbra revealed her shock at the question.

“I haven’t really thought about it actually,” she confessed. “It’s crazy to think that it could be a possibility to even be up for a GRAMMY. I have no idea. We’ll see.”