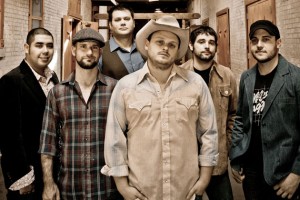 Earlier this week, I caught Josh Abbott Band‘s debut headlining set at Bowery Ballroom in New York. It was as if I was transported to the South watching the band play and it makes sense why: they’re from Texas.

The room was packed with hardcore fans singing and dancing — might I add two-stepping — along throughout the entire show. I haven’t seen a crowd that energetic in a while. Throughout their raucous set they played some of their older classics including “She’s Like Texas” and “Taste,”  as well as performed some songs off their upcoming EP Tuesday Night due out on Sept. 23.

While their set was lively, complete with electric, acoustic and bass guitar alongside banjo, fiddle and drums, Josh Abbott Band segued effortlessly from the more upbeat numbers to the softer ballads. Current single “Hangin’ Around” had the crowd singing along. And, long after their performance ended it was implanted in my head. An ear worm of a song, “Hangin’ Around” catches your ear from the very start of the track. The fiddle accompanied by Abbott’s memorable lyrics make it nearly impossible not to dance and sing along.

Listen to “Hangin’ Around” below. Josh Abbott Band’s EP Tuesday Night will be available on Sept. 23.