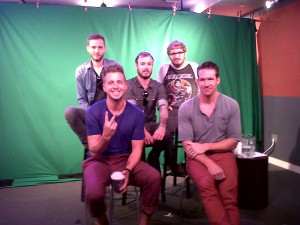 Last week I had the pleasure of sitting down and talking with OneRepublic about their new single, forthcoming album and what they think of Kanye West’s new song about Kim Kardashian interestingly titled “Perfect B****.” For more, watch the video below and read my article on CBS. 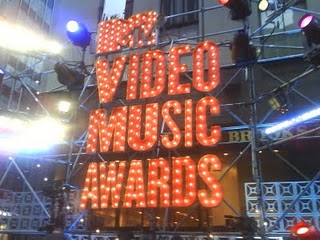 I couldn’t go anywhere this week without hearing a Taylor Swift song. Kanye West on the other hand, not so much. MTV’s Video Music Awards are now a week old, but the press is still abuzz. I was outside Radio City Music Hall when the debacle occurred — five minutes before Swift took to the streets for her live performance (see videos below).

Let’s take a look back at the night’s events and let me know your opinion in this week’s poll. Do you think Kanye’s apology was sincere? What would you have done if you were Taylor? Are you tired of hearing all of this being reported? Feel free to leave your response in the comments.

Taylor Swift performing “You Belong With Me” live:

What you didn’t see: After her performance, fans on the street were pounding on the cabs and chanting her name, in a way letting Taylor know they had her back.

Beyonce proves, once again, why she is one of the classiest female artists in the industry today:

After watching it all take place, what are your thoughts? Be sure to vote in this week’s poll! 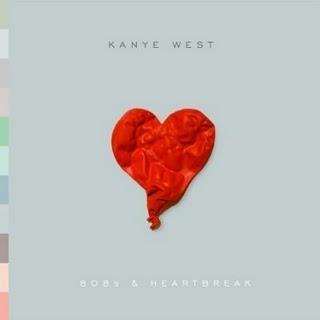 Possibly the most hotly debated release of 2008 was Kanye West‘s 808s & Heartbreak. I’ve been listening to the album off and on since the November release, in hopes that it would grow on me and I’d find some rare gem or piece of inspiration behind it. Alas, I’m still quite dumbfounded and undecided. There’s no party without one of Kanye’s club hits, whether it be “The Good Life,” “Stronger,” “Gold Digger,” etc. but this album lacks the energy and fun vibe that West is known for.

Using T-Pain’s technique for Auto-Tune, 808s & Heartbreak introduces a new side of West. His usual cockiness and danceable tracks are now masked by robotic-like vocals and even more somber lyrics. While the album lacks many of his club-thumping hits from the past, current singles “Heartless” and “Love Lockdown” have been gaining heavy rotation.

Understandably, West has had quite the emotional year. With the death of his mother and a broken engagement, his album, aptly titled 808s & Heartbreak, brings about a side many haven’t seen before. Whether he’s lamenting about his life on opening track, “Welcome to Heartbreak” (“My friend shows me pictures of his kids/And all I could show him was pictures of my cribs/He said his daughter got a brand new report card/And all I got was a brand new sports car”) or how past girlfriends have done him wrong — see most of the album — if one thing is certain, this is definitely not your typically confident, entertaining Kanye West. Though, not necessarily a bad thing.

West distinguishes himself on 808s & Heartbreak. Sure, it’s a breakup album but this record exemplifies that even world renown musicians like West don’t always have it so easy. West opens up and shows listeners that he is just like them — struggling with death, heartbreak and questioning it all the while, albeit with a more luxurious lifestyle. He is dealing with heartache the only way and best way he can — by immersing himself into his music, giving the listener and the world a little more of himself.

As depressing as the record may sound on the surface with titles like “Welcome to Heartbreak,” “Heartless” and “Bad News” West does bring about some surprises. Six-minute long track “Pinocchio” exemplifies his powerful live performance as well as his complete honesty in the heartfelt song. A man of his word, he has told fans and media alike that he wants to reinvent the industry and be “the next Elvis.” While he hasn’t accomplished that goal just yet, 808s & Heartbreak proves that he’s willing to take the plunge and try something new, regardless of what critics or fans think, once again differentiating himself from the crowd.

What are your thoughts on Kanye’s new album? I’d love to hear what you think. 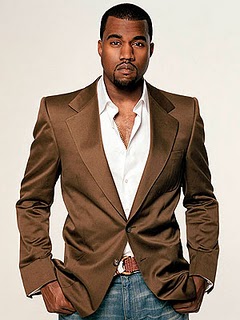 It seems only fitting to post my profile on Kanye West this week, with all the press he’s been getting from his most recent escapade — assaulting paparazzi at a Los Angeles airport. Despite the increasingly egotistical persona West has developed over the years, his hits keep getting bigger, his records continue to surpass opponents speculations and no one can deny that his hooks are mind-boggling catchy. Whether he’s rapping about Jesus, throwing tantrums at awards shows or tossing insults at his fellow musicians, there is no doubt about it — West is and stays the headline.

As promised earlier this week, below is my first artist profile written in college. While the text seems a bit outdated, talking about previous albums, I think Kanye’s true character comes out in the quotes. I combined some of the one-sentence paragraphs because on Blogger it just doesn’t read well broken up so short. For my first artist profile it’s not too bad, is it? Be honest, I can take criticism! Thanks for reading.

Hip-hop Star Rises to the Top

Considered one of the hottest newcomers in hip-hop, Kanye West has been around longer than he has let on. As far back as 1997 West began co-producing tracks for artists when he was just 20. He received his big break when working in the background with some of hip-hops most famous names, ranging from Jay-Z to Ludacris and Alicia Keys as a lyricist and songwriter.

Inspired by the Jackson 5, the Temptations, and even the Doors on many of his works, West created the, “soulful yet gritty sound behind Jay’s best tracks that his imitators are still trying to copy today,” according to www.rocafella.com, his record company’s Web site. After his success in helping other artists, West decided it was time to make his own record. However, those West worked with were skeptical about letting him rap on his own album. In fact, many thought the idea was absurd.

“Kanye wore a pink shirt with the collar sticking up and Gucci loafers,” said Damon Dash, a Roc-A-Fella CEO, in an August 25, 2005, Time article. “It was obvious we were not from the same place or cut from the same cloth.”

West was not the typical rapper. He grew up in suburban Chicago. Since he did not go along with the typical “rap” image, his label did not know how to market him. “It was a strike against me that I didn’t wear baggy jeans and jerseys and that I never hustled, never sold drugs,” West said.

Regardless, West persevered and soon signed his first record deal.

West released his debut album “The College Dropout” in early 2004. His album debuted at the top of the charts, selling 440,000 copies in its first week. His first three singles, “Through the Wire,” “All Falls Down,” and “Jesus Walks,” earned heavy airplay and critical recognition. “The College Dropout” was awarded a Grammy for Rap Album of the Year and his single, “Jesus Walks,” won a Grammy also for Best Rap Song. The New York Times, Time Magazine, Blender, Rolling Stone, GQ, Spin, The Source, and XXL also named “Dropout” Album of the Year.

Now 28 years old, West has taken a giant leap into the forefront of the music industry. His new album, “Late Registration,” has been ranked the No. 1 album in the country and is getting continuous raves.

What makes West different from other rap artists is the distinction of his music. “‘Late Registration’ addresses a litany of topics that range from the personal to the political and all that falls in between,” said www.rocafella.com. His current hit single, “Gold Digger,” is a playful song in which West talks of girls who just want a man’s money and, instead they should stand by working class men. This hit is accentuated by Ray Charles-inspired vocals from Jamie Foxx.

West’s activist side is also portrayed on his album, “Late Registration.” One track in specific, entitled “Crack Music” talks of the downfall of poor African-Americans from crack use. “Jesus Walks,” his third single released on his debut album, is one example of the immense diversity of West’s music and what differentiates him from other rappers. Such lyrics include, “To the hustlers, killers, murderers, drug dealers/Even the strippers/Jesus walks for them.” Later in the song, West raps, “But if I talk about God, my records won’t get played, Huh?”

West has brought a new type of hip-hop to the table for listeners to hear and appreciate everywhere.

“I’m trying to break radio, not make radio,” West said. With any success, comes questionable actions as well. Perhaps one move that West was questioned on was hiring composer and producer, Jon Brion.

Brion is best known for his lush, quirky orchestral arrangements for Fiona Apple, Aimee Mann and P.T. Anderson movies, Brian Hiatt wrote in his Rolling Stone article, “Kanye Evolves on ‘Late.'” “The most obvious sign of West’s quest for universal appeal was his genre-defying decision to hire Brion,” Hiatt wrote.

Before West asked for his assistance, Brion had never worked on a hip-hop track. “Some people who hear about this assume it’s just total madness,” Brion said in Hiatt’s article. “But why not make the attempt to bridge as many gaps as possible?”

And bridging gaps is what West has done. His new album is an example of his versatility. Working with such artists as vocalists Cam’ron, Brandy, the Game, Jamie Foxx, Jay-Z and Maroon 5’s Adam Levine, show that West is no typical hip-hop artist. With each new album release, West continues to grow as does his influence in the world of music.

Despite how you may feel about Kanye West, you cannot deny that every song he produces or artist he collaborates with, he seems to strike gold. “American Boy” is no exception. Estelle’s soulful, catchy vocals make the song enjoyable to listen to and Kanye’s slow rapping interludes throughout the song only accentuate and add to the song. If you haven’t heard it yet, I’m sure it will hit your radio station soon, check out the video below and let me know what you think!