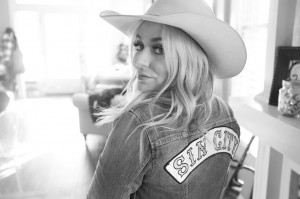 Songwriting Session is a column that goes behind-the-scenes with artists and songwriters. Each Sunday, a new songwriter will share their journey and provide lessons they’ve learned along the way. This week, Jessie Jo Dillon shares what she has learned as a songwriter.

Songwriting runs in the family for Jessie Jo Dillon. The daughter of Nashville Songwriters Hall of Fame inductee, Dean Dillon, she admits that her father was often a huge shadow to be in. As a result, Jessie Jo frequently discouraged herself from becoming a songwriter. It was only a matter of time, though, that she realized music was her true calling.

Dillon grew up in a musical family with her songwriter father and two musically inclined brothers. She remembers being surrounded by music with everything from country to rock ‘n’ roll from the ’60s and ’70s being played in her home. The Eagles, the Rolling Stones, Led Zeppelin and Bob Dylan were frequently on the speakers and she recalls constantly writing as a child.

“I was always fascinated with words and the way they made people feel,” she tells me over the phone during a break from a writing session. “I had an English teacher that encouraged me all the way through, ‘You’re a writer, you’re a writer,’ [she said] even when I was trying to discourage myself from doing it.”

Adamant about not following in her father’s footsteps, Dillon moved to Los Angeles for a year where she soon found her songs being critiqued by a woman in publishing who urged her to go home. Taken aback at first, she thought the review was harsh but that wasn’t what the woman meant.

That was the push Dillon needed and she moved home around 2008 where she hit the ground running, but again was determined to do things her way. She didn’t want anyone to think she was joining the trade because of her father so she put more pressure on herself to strike out on her own and her hard work eventually paid off when she acquired a publishing deal a year later at the age of 21.

In 2010, she’d receive her first Grammy nomination for her very first cut, a song she wrote with her father and Casey Beathard called “The Breath You Take” that George Strait recorded. The song was nominated as Best Country Song at the 2011 awards ceremony. Dillon had the idea for “The Breath You Take” and called her dad and told him about it. That day he was writing with Beathard and invited his daughter to join them.

“We wrote it super quickly and I think it meant the same thing to all three of us, even at different stages in our lives: slow down and take it all in,” she explains. “We get so caught up in trivial things that don’t really matter in the grand scheme and it is just a moment of, ‘You’re going to miss the point of all of it if you don’t take it all in.’ That was a really special song for all three of us.”

For more of my interview with Jessie Jo Dillon, visit Sounds Like Nashville.