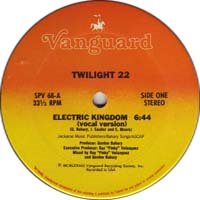 Who doesn’t like free music? Vanguard Records is spicing up this holiday season with a free album download. A sampler of talented up-and-coming artists as well more notable musicians who have been rapidly climbing the charts, there is much to offer on the 16-track release.

Fellow blogger and radio host of Lyrical Venus, Heather Miller-Rodriguez, sent me the link last night and I’ve been listening all afternoon. While the sampler isn’t solely holiday music, its a solid mix of eclectic and extremely talented singer-songwriters.