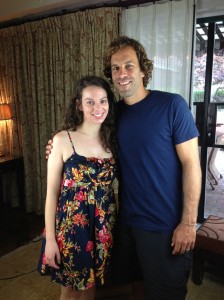 This week I had the fortunate pleasure of seeing Jack Johnson perform live for the first time and then interviewed him in person. As a result, I’ve had his music on repeat all week and have found myself in an incredibly relaxed state. While his new album From Here To Now To You doesn’t come out until September, he gave me a preview of what to expect (see interview below). In the meantime, listen to his popular track “Banana Pancakes,” which I’ve had stuck in my head all week!

While the album is populated with love songs for his wife Kim (like first single “I Got You”), others are written through the eyes of his children.

“I have three wonderful kids and its fun to look at the world through their eyes,” he told me earlier this week. “It’s inspiring. And then I have a few love songs. Its just usually me trying to make my wife laugh and then they end up being the songs.”

One of those love songs on the album is “Never Fade,” a track Johnson played Monday evening. “Picture a Bill Withers drum beat,” he said before he began to strum the song on his acoustic guitar. When discussing the song with us the following day, he explained the difficulties of playing his music solo.

“Sometimes when you have it on a record you picture or hear the production a certain way,” he explained. “I hear the drums when I’m playing so when I’m playing that song alone I miss my drummer or I miss having the ukulele on top or the bass line. ‘Never Fade,’ when I play that one alone it feels particularly sparse to me but the story is still there and I have to remind myself that that’s the way I would hear it because when I wrote it, it was like that.”

For my complete interview with Jack Johnson, visit Radio.com.