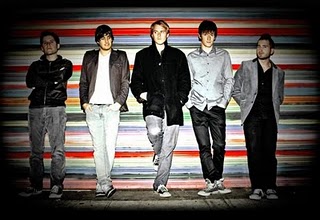 I’ve been to my fair share of shows over the years. Every now and then there’s a band that really sparks your attention. Not just the, “Wow. They were pretty good,” remarks after a concert, but thinking that this band truly has something special. Something different than all those other up-and-coming bands out there. This is exactly how I felt the first time I covered The Canon Logic.

It was October 2008 at Arlene’s Grocery and the first night of the CMJ festival. I had never seen a New York crowd go that crazy. The girls were dancing like maniacs in front of the stage and everyone was wearing Canon Logic sunglasses that the band made specifically for their showcase. Performing at 7pm on a Tuesday night the first day of a festival was definitely not the best time slot, but the band worked it to their advantage.

I interviewed the guys after their set and never imagined I’d wind up working with them as tour manager and publicist for a few months. Funny the way things work out. During my interview, I asked TCL what makes them different from every other band invading NYC during CMJ week. Guitarist Josh Greenfield informed me of their diverse and devote fanbase where everyone from parents to grandparents to even his high school-aged sister enjoy their performances and frequent shows.

“I think we have a wide range of fans. We like to try and bring everybody together. We’re trying to pull from so many different influences. We really like the classic rock stuff and we also like what’s going on now. I think we have a good balance of the two, which allows everyone to really get into the music.” 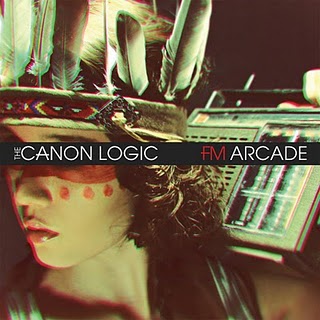 It’s been a long journey since that October. Many concerts later, The Canon Logic are releasing their debut full length, FM Arcade. The 12-track album is an accurate portrayal of their talent and energetic live show. Think The Killers meet The Beach Boys. Or, as Time Out New York once wrote, “The Canon Logic plays 1960s-style shameless pop fused with latter-day production sensibilities.”

Kicking it off with solid instrumental buildup on first track, “Villain In America” the listener is jolted awake and quickly realizes this isn’t your typical debut. Frontman Tim Kiely’s vocals have an old school vibe that intrigue and are never overpowered by the musical accompaniment.

Second track, “Avenue of Criminals” has always been a concert favorite. Longtime fans will be impressed with the arrangement. Slow piano draws the listener in at first before Kiely enters while guitar and percussion further layer the track. Complete with Beach Boys-esque harmonies, their first single off FM Arcade is bound to stay stuck in your head.

“It All Went Away…” switches gears from the high intensity of the first few tracks. Just over a minute long, the piano based song showcases the band’s willingness to try something new with a stripped down approach, breaking up the album well. “Nights At Armour Mansion” follows suit and is a darker number with a slow beat at first listen. Midway through, however, an instrumental interlude quickens the pace with fitting percussion before the rest of the band joins in on vocals.

Standout track, “Dead Man” begins with 15 seconds of guitar distortion reminiscent to that of The Kinks. The energy never wavers, and instead continues to electrify throughout the entire track. This is indie rock at its finest. While it’s hard for the rest of the album to follow such intensity, “Dead Man” is one track that is sure to have music critics raving.

Ending with the minute-long “Last Day of Man,” The Canon Logic leave the listener wondering what they can expect next. A solid debut release, FM Arcade, is only a glimpse into what is sure to be a bright future for the Brooklyn-based band.

Gearing up for their debut full length release this coming Tuesday, FM Arcade, will be available on iTunes and Canon Logic’s Web site. If you can’t wait that long, you can download “Nights At Armour Mansion” and “Avenue Criminals” for free here.

The band will be performing at Mercury Lounge tomorrow night celebrating their release. For more information, visit their Web site.