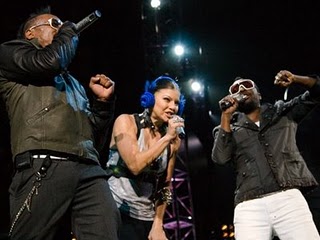 They’ve sold millions of albums and have battled breakup rumors for years, but the Black Eyed Peas proved Saturday night that they’re not going anywhere. Their energetic Zootopia set at the IZOD Center in New Jersey had the crowd dancing and partying the night away. And, if their current radio hit, “Boom Boom Pow” is any indication of their upcoming June 9 release, The E.N.D. BEP’s will surely have the summer ’09 record.

While signing autographs for fans, Fergie was nice enough to chat with me about what’s going through her head while performing. Extremely down to earth, her answer may surprise you. Read on to learn what the rest of the gang had to say about the new album, working with Michael Jackson and what President Obama thinks of the Peas.

So tell us about your new album, The E.N.D. The Energy Never Dies. What does that mean? What is it all about?
Will.i.am: The E.N.D. The Energy Never Dies means a lot of things. But, most importantly it means the end of the rumors that the Black Eyed Peas are breaking up. It’s the end of an era. There used to be record stores like Virgin and Tower and Warehouse and Sam Goody and they’re no longer. The era is moving towards…we don’t know yet. But we’re going to continue to make music and tour and make people dance and make music that can change people’s lives and change our lives as well.

Everybody’s excited about Michael Jackson’s comeback tour. You and Fergie worked with Michael. What was that experience like working with him?
Will.i.am: The experience working with Michael Jackson was phenomenal. I flew out and worked with him in Ireland and produced songs on his Thriller 25 and a couple of songs on his new record. I don’t know what’s going to end up on the record, but it’s great. He’s a gift to the world.

You just did X Men. Have you ever thought of taking the acting route?
Will.i.am: That would be cool, but right now I’m focused on the Peas. X Men I filmed last year and I’m so thrilled to be a part of it. It’s a great movie. After the Peas run maybe I’ll think about it.

You set up a scholarship. Why?
Will.i.am: I set up a scholarship, the i am scholarship, because someone at some point in time believed in me and my dreams. I made it out of the ghetto. I’m able to take care of my family and I want to provide that same opportunity for some kid that has dreams – especially in this economy. You don’t bail out on kids just because the finances are not there. You still have to let them know that their dreams can become a reality, so I wanted to do my part.

Fergie, looking back on all you’ve accomplished, what’s the highlight of your life so far?
Fergie: The highlight of my life – going on tour with these guys. Seriously. Honestly, joining this band was such a blessing for me. Just them accepting me into their circle and becoming friends, it really gave me the confidence to be the artist that I had always wanted to be. I never would have been able to do a song like “My Humps” if it wasn’t for these guys and “Fergalicious” or anything like that, if they didn’t give me the confidence to tour and explore Hip-Hop music, one of the loves of my life.

Can you tell us about your next single?
Will.i.am: Our second single is called “I Gotta Feeling.” It’s dedicated to all the party people out there in the world that want to go out and party. Mostly every song on the Black Eyed Peas record is painting a picture of our party life. It was a conscious decision to make this type of record. Times are really hard for a lot of people and you want to give them escape and you want to make them feel good about life, especially at these low points.

Taboo: This is the first time we actually had all four of us on a song simultaneously with the verses, which is something different for us. Usually we break up the verses and everybody has their parts. It was a good opportunity for us to show the world what would come of it.

What was the best thing Barack Obama has said to any of you? Will.i.am: He told me that he likes my style and he likes the way that I dance.

Are you guys playing the “American Idol” finale? If so, what are you going to perform on it?
Will.i.am: Oh. I don’t know if we can say that, ‘cause they told us not to. Guess I just blew it, right?

So what are you going to do?
Will.i.am: [starts singing] Boom Boom Boom.

What do you think about when you’re onstage performing?
Fergie: When to breathe ‘cause jumping around with these guys I realize I do have to sing so I can’t be too out of breath. I’m learning now to perform in heels. I used to not perform in heels. I only did three songs in heels; “Glamorous,” “Fergalicious” and “Big Girls.” “Big Girls” I really don’t have to move much. It’s a new thing for me, learning to dance in heels, so we’ll see how that goes. Also, connecting with the fans. It’s really not just performing out to the light, but really connecting with the people and looking at people. 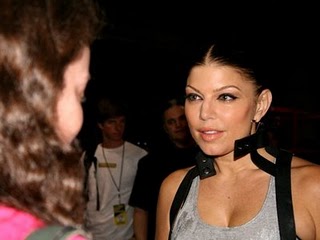 You can also read this interview on MarieClaire.com.