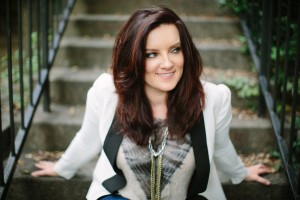 If you watched the GRAMMY Awards earlier this month, than you’ll remember Brandy Clark’s performance of “Hold My Hand” with Dwight Yoakam. A moving song, it was by far one of my favorite performances of the night. Listen to it below and to learn more about Brandy’s GRAMMY nominated album 12 Stories from my interview with her for Radio.com.

“Had it been up to just me it wouldn’t have happened,” she told me last year. “At the time, I wasn’t looking to make a record. I thought that my chance at having an artist career had passed me. I was really focused on songwriting and didn’t even entertain that idea.”

Brandy had already penned hits for The Band Perry (“Better Dig Two)”, Miranda Lambert (“Mama’s Broken Heart”) and Kacey Musgraves (“Follow Your Arrow”), and she was content with her career as a songwriter. But that soon all changed.

“Emilie Marchbanks, who was at Fitzgerald Hartley [management company], approached me about making a record, and I honestly thought she was playing a joke on me at first, because I didn’t know her and she was really funny,” Brandy recalled with a laugh. “She was so over-the-top about her passion for my songs and my singing, and I just thought, ‘Am I on Candid Camera?’”

“It’s been crazy the response it’s getting,” she said with a big smile. “There were times in that process of getting passed on and it not working out with labels where I would think, ‘Maybe I’m in a bubble…maybe we’re the only ones that love this. We’re the only ones that “Hold My Hand” moves like that.’ For it to come out and see what [people] say on Twitter and Facebook, and then when I play shows, it’s just so gratifying. And just a testament to not give up on something that moves you. I really think that if it moves you, it will move other people.”