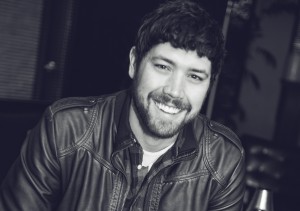 Songwriting Session is a column that goes behind-the-scenes with artists and songwriters. Each Sunday, a new songwriter will share their journey and provide lessons they’ve learned along the way. This week, Corey Crowder shares what he has learned as a songwriter.

Corey Crowder never dreamed of being in a band or on the stage. Music was simply a hobby until he started playing guitar and singing in church as a teenager. Soon after, all he cared about was music and in college he frequently played open mic nights where listeners loved his original songs. This prompted him into forming several bands, thinking he wanted to be Dashboard Confessional and Death Cab for Cutie until he discovered Bob Dylan.

“Bob Dylan sent me down a spiral and I got really into Southern rock and I started playing,” he recalls nostalgically from his writers studio at Liz Rose Music in Nashville.

He eventually acquired a record deal with Christian label Tooth & Nail Records where he released one album, Gold and the Sand, but it was far from a success. Soon he found himself dropped from his label as he and his wife moved from Tennessee back home to Georgia.

“I felt like there was my shot, I bombed, and I might as well just play bars,” he admits. “I went home and worked for a t-shirt company. I sold t-shirts to bands that I had toured with.”

This was far from Crowder’s last foray in the music industry. Back in Georgia, his wife decided to submit one of his songs to country station 94.9 The Bull for their locals only Saturday night radio program. Liking what they heard, the station played Crowder’s song “Love” and EMI executive Bruce Burch was flipping through stations when he heard the track.

The two knew each other from his t-shirt selling days so Burch called Crowder and convinced him to meet in Athens, Ga. the next day where he was running a music business program. Another music executive, Duane Hobson, joined them and suggested Crowder give Nashville one more shot and to play for the head of Sony. Still uncertain about Music City, he decided to give it a try and got a developmental deal with Sony during his first meeting in 2009. So, he and his wife packed back up and moved to Nashville and he began writing another album.

“I signed a publishing deal with Universal and just started writing like crazy. Every day. Once, twice a day. Sometimes three times,” he recalls. “They had paired me with a producer and we were writing for my record. I didn’t get to pick my songs. It was the first time I had ever been in that process. What I loved most was writing and not necessarily the performing aspect.”

Soon after, there was a regime change at Sony and his deal got dropped. He says it was the best thing that’s ever happened to him, though, as he quickly realized he didn’t want an artist career. Instead, he wanted to be a songwriter, something he didn’t think was an option until he began getting holds and cuts with his songs.

“You start going, ‘Maybe I can make a living doing this.’ I started over. Once I left my deal at Universal, I made that decision the moment that I said, ‘Forever, here on out, no more artist. Writer/producer only,’” he says. “That’s been the last four years. There’s a million ways to get here, but that was my way that I ended up here.”

Over the past four years as a full-time songwriter, Crowder has accomplished more than most achieve in a lifetime. He was recently nominated for a GRAMMY for Chris Young and Cassadee Pope’s “Think of You” in the Best Country Duo/Group Performance category where he is both a songwriter and producer on the track. It’s recognition he never thought he’d see and a bucket list moment.

Crowder wrote “Think of You” with Young and Josh Hoge and says the song was inspired in part by a friend who had recently gotten divorced. While Crowder has known his wife since he was 16, he said he began thinking about how terrible it would be for their friends if they split up.

“Our identity is in each other because we’ve been with each other over half our lives,” he explains. “I knew that one was something special when we wrote it. That rarely happens. Usually when I think a song’s a hit, it’s not. That one I was like, ‘That song’s a smash.’ I just knew it. It felt different. Maybe it was because it came from a real place that I felt that way.”

For more on my interview with Corey Crowder, visit Sounds Like Nashville.