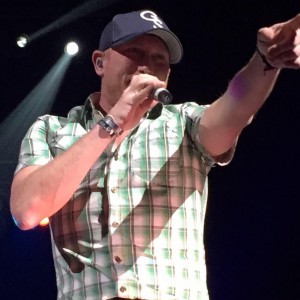 Cole Swindell has had an amazing year. Not only has he had back-to-back No. 1 singles as an artist, but songs he has penned for Thomas Rhett and Luke Bryan have also gone to No. 1. Not to mention, he released his debut album in February and is currently on his first major headlining tour.

I’ve been lucky to talk to Cole twice this year, back in February right before the release of his first album, and just last month the day before he performed at Macy’s Thanksgiving Day Parade. (Stay tuned for that interview later this week on Radio.com.) It was incredible to see his career transform over the year, from hearing how he made his way from Luke Bryan’s merch guy to his opener to now headlining his own shows. Cole remains as down to earth today as he did the first time I met him and you can see how grateful he is for his success as he is all smiles when talking about where his career has taken him. Below is an excerpt of our chat from earlier this year.

Cole Swindell first met Luke Bryan as a college student at Georgia Southern University, the same school the Crash My Party singer attended a few years earlier. “When I was in college he had already moved to Nashville,” Cole told me. “He came into town to do a show [and] me and my buddies were sitting on the front porch of the fraternity house waiting on his show that night. He came up needing to change his strings and played something he had written and I was like, ‘Man, that’s what I have to do.’”

The two kept in touch and when Cole moved to Nashville nearly six years ago, Luke happened to need a merch guy. While on the road, Cole focused on songwriting and began writing with the “Drink A Beer” singer and Florida Georgia Line, who were Luke’s opening act at the time.

“Just getting to write songs out on the road like that, that’s what got me started,” he said. “Everybody has their own path and mine started through songwriting.”

In fact, one of his favorite songs–not just on the album, but that he’s ever written–is the album’s closer, “The Back Roads And the Back Row,” a song that he says tells the story of his life.

“I grew up playing sports before I started singing,” he recalled. “Friday nights we were on that football field, Saturday we might be riding some back roads, chasing girls. But Sunday morning we had our butts in church.”

For more of my interview with Cole Swindell, visit Radio.com.