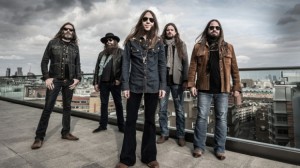 As soon as Blackberry Smoke start playing, it’s like the air gets thick and swampy. For well over a decade now, the Southern rock quintet have made a name for themselves with their gritty country and blues guitar riffs, vivid storytelling and frontman Charlie Starr’s distinct vocals, delivered with a hint of his Southern drawl.

While ‘Southern rock’ is a good catch-all generalization, it’s often hard to place Blackberry Smoke into just one genre, and they’re OK with that. In fact, a number of rock legends from the South are fans, including Gregg Allman—who sings the group’s praises as being “the band that will put Southern Rock back on the map”—and ZZ Top‘s Billy Gibbons, who frequently jams onstage with them.

“We never sat down and thought, ‘We’re a Southern rock band,’” frontman Charlie Starr tells me over the phone. “We’re just a rock & roll band from Georgia. So are R.E.M. They play the kind of music that makes them feel comfortable and so do we. Plus, I have a pretty Southern accent and Michael Stipe doesn’t, so the singing comes across in a different way.”

“I’ve always appreciated albums that have a lot to offer lyrically and musically,” Starr says, a few days before the release of Blackberry Smoke’s fourth album, Holding All the Roses. “Nobody wants to buy an album and listen to it and all the songs sound the same, that’s a bummer. We’ve always tried to approach an album like an album. Have it be a bit of a roller coaster ride where you have songs with different feel, different subject matter.”

While the album takes the listener on a journey, it also shows Blackberry Smoke’s evolution as a band. This time around, they’re using more textures, haunting string features and keyboard interludes unheard of on the band’s previous releases. Throughout its 12 tracks, Holding All the Roses has songs about women, the devil, loneliness and seeing a woman in the moon on the fittingly titled,”Woman In the Moon.”

“It feels good to me to continue to evolve and not be stuck in a rut,” he says. “There’s something to be said about allowing yourself freedom musically. We’re lucky, we don’t really have to answer to anyone. We don’t have a major label breathing down our necks that says, ‘This is not working.’ We appreciate that freedom.”

Read my complete interview on Radio.com.

Last year I covered a Blackberry Smoke show and was blown away, eventually featuring them as my Band of the Week.

“The band exudes classic Southern rock bands like Lynyrd Skynyrd. It comes as no surprise then, that Blackberry Smoke have shared the stage with ZZ Top, Lynyrd Skynyrd, Shooter Jennings, Cross Canadian Ragweed, among others,” I wrote.

When performing onstage with them Billy Gibbons even confessed, “I love Blackberry Smoke!”

Next Friday Blackberry Smoke will be performing at Irving Plaza in New York and I have a pair of tickets to give away! 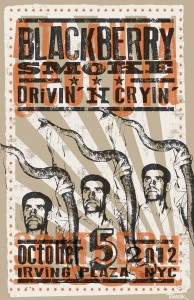 For your chance to see Blackberry Smoke live in New York e-mail me your name and the reason I should select you. I’ll pick a winner next week. Good luck!