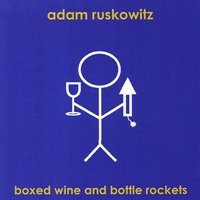 A punk rocker turned acoustic singer-songwriter may be incredulous for some to grasp, but for Kansas native Adam Ruskowitz it could work. While at some moments the listener can picture a frontman screaming the lyrics over a loud bass guitar and drum beat, Ruskowitz’s second solo-acoustic album gives the listener a glimpse into his past and an idea of where he is headed.

At times, Boxed Wine and Bottle Rockets is hard to grasp, with fluctuating vocals and rough guitar features. While his guitar playing isn’t necessarily weak, in tracks like “Hurricane” and “July” the squeaking sound between the changing of each chord played is unbearable.

Yet, Ruskowitz’s strong storytelling throughout each track is ever present. While “Trampoline” vaguely elicits a comparison to the Gin Blossoms with his soft vocals and light guitar strumming other instances suggest a slight resemblance to Elliott Smith. I found myself liking tracks like “Trampoline” and “Five Years Later” most because of Ruskowitz’s deeper vocals. At times, his higher-pitched voice on songs like opening track, “Hurricane” comes across irritating. A great songwriter and good singer on tracks with a slightly lower register, Boxed Wine and Bottle Rockets isn’t a complete loss. Only his second solo effort, it will be interesting to hear what the future holds for Ruskowitz.

You can read this review originally posted on ReviewYou.com here.