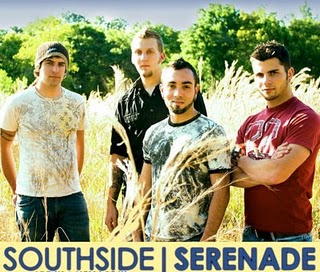 Since creating a MySpace for my blog (you can add me here if you haven’t yet!) I’ve been getting tons of band requests. While not every band I accept catches my ear, quite often I am pleasantly surprised at some of the bands I do listen to. Similar to my “Song of the Week” post at the end of each week, I’ve decided to start a “Band of the Week” or “Artist of the Week” post in the beginning of each week. Whether it be a band I stumble across on MySpace or hear in a commercial, I’ll feature a new band each week that I think deserves a listen.

This week’s first “Band of the Week” is Florida-based band Southside Serenade. With vocals reminiscent to Dave Matthews and catchy, upbeat guitar playing recalling that of John Mayer, their music is sure to get stuck in your head after the first listen. “Ms Pristine,” featured on their MySpace, is an example of one of these tracks. While the track is comparable to Dave Matthews, the faster musical accompaniment has the listener coming back for more.

“Troubled Premonition” is another strong song, featuring a solid drum and guitar interlude. Slower ballad “Birthday at the Beach,” is a nice transition from some of the band’s faster material, having that huddled around the campfire feel while playing acoustic guitar, or perhaps in Florida natives’ Southside Serenade’s case, more appropriately situated around a bonfire on the beach.

It seems that Southside Serenade plays gigs mostly in Florida for now, but after giving their MySpace a listen, I’m pretty sure the rest of the country won’t be out of reach for too much longer. Take a listen and let me know what you think!