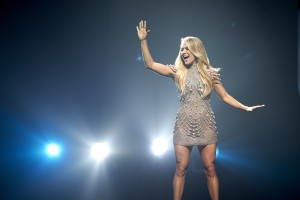 Carrie Underwood has reigned on the country charts for over a decade following her 2005 American Idol  win. With seven GRAMMY Awards under her belt and 26 No. 1 singles, Underwood is one of very few female contemporary country artists receiving steady airplay.

Her pristine vocals are unmatched by any female singer today and her most recent headlining tour, The Storyteller Tour, displayed her vocal talent night after night. The tour was also recognized by Pollstar, who named Underwood as the top female country touring artist.

Underwood has released numerous songs over the years that touch upon female empowerment and embody strong female characters. On “Church Bells,” a married woman cleverly breaks free from her abusive husband and “Dirty Laundry” has Underwood singing of how she refuses to put up with an unfaithful man. Meanwhile, the memorable murder ballad “Two Black Cadillacs” has two women teaming up to seek revenge on a cheating spouse.

On each track, Underwood’s powerful vocals are at the forefront. The song that perhaps best showcases this is the poignant “Something In the Water,” which you can listen to below.

Today marks the singer’s 35th birthday so here’s to hoping at least 35 more chart toppers are in her future!