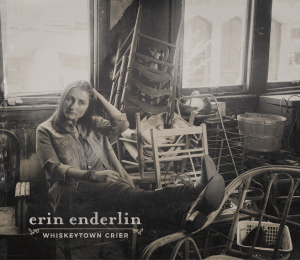 I recently began freelancing for 650 AM WSM, radio home of the Grand Ole Opry, and was lucky enough to spend some time visiting the station’s afternoon show, Nashville Today. One of the guests on the show today was singer-songwriter Erin Enderlin and I was blown away at her lyrics and the powerful storytelling within her music. She performed the poignant “Till It’s Gone” featured on her latest album, Whiskeytown Crier, which you can hear below.

While Enderlin is an engaging solo artist, she has also penned songs for the likes of Terri Clark, Randy Travis, Alan Jackson, Lee Ann Womack, and Luke Bryan, among others. Produced by Jamey Johnson and Jim “Moose” Brown, her 2017 release embodies plenty of heartache, murder ballads and classic country songs that will stop listeners in their tracks. Well aware that she pens her fair share of sad songs, Enderlin told host Devon O’Day that writing is often therapy for her.

“I have chronic depression and I think for a long time maybe I didn’t understand how sad my songs were,” she admits. “For me, music is therapy.”

Enderlin will perform on the Grand Ole Opry for the second time on Saturday (March 10) and an afternoon show at Nashville’s 3rd and Lindsley on Tuesday (March 13). For more of her tour dates, visit her website.