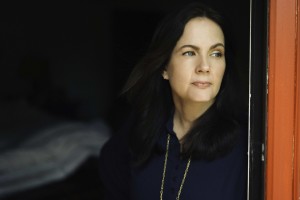 Lori McKenna is well known for penning some of country music’s most memorable songs including Tim McGraw’s “Humble & Kind” and Little Big Town’s “Girl Crush.” The Massachusetts-based songwriter is also a solo artist and during a discussion on Saturday (March 3) at the Country Music Hall of Fame and Museum in Nashville, McKenna announced that her Dave Cobb-produced 11th studio album will be released in July. Titled The Tree, it will feature songs about family including one about her dad called “People Get Old.”

“The goal is to write a great song and to write the best song we can write that day,” she told the audience at the CMHOF. “Sometimes a song will lead you to where it wants to go . . . the best way to write a song is to not worry about what anyone else thinks.”

I chatted with McKenna ahead of the release of her tenth studio album, The Bird & the Rifle, where she discussed writing her first song at the age of 12 and the story behind “Humble & Kind.”

McKenna says that “Humble & Kind” is fairly simple and the list of hopes and dreams for her children featured throughout the song was easy to write being a parent. While she always starts with verses when it comes to songwriting, McKenna said for “Humble & Kind” the chorus came first.

“I knew that I lucked out in finding that chorus, to be honest, and then everything else was easy to put in there,” she explains. “It was just a matter of editing it down and putting it all in the order that worked in my head the right way.”

“I had the title and I knew I wanted it to be things I wanted my kids to know,” she says, explaining her process. “Once you get there, there’s a lot of information. You could overshoot the song. It was more about editing and taking out ‘put the toilet seat down.’ That didn’t necessarily have to be in it.”