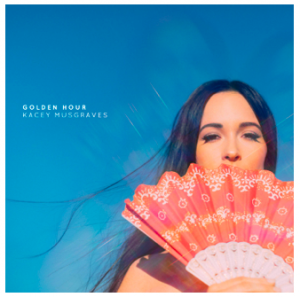 Kacey Musgraves is well known for pushing the boundaries of country music with songs like her Grammy Award winning “Merry Go Round” and CMA Award winning “Follow Your Arrow.” Now, the singer is back with two new songs off her upcoming fourth studio album, Golden Hour, due out March 30.

Released last week, “Space Cowboy” immediately strikes a chord with its imagery and Musgraves’ whispered vocals. “Sunsets fade and love does too / Yeah, we had our day in the sun / When a horse wants to run ain’t no sense in closing the gate / So you can have your space, cowboy,” she sings on the chorus.

She shared on Instagram earlier this week that the song was inspired by seeing a stallion charging powerfully from one end of the arena to the other.

“Though I was ‘safe’ on the other side of the arena wall, it kinda scared me when he came flying toward me..barely stopping in time,” she writes. “My riding teacher saw him coming at me and yelled at me to move away. I said ‘I’m fine! The gate is closed!’ to which she said, ‘Girl – when they wanna go they will go…there ain’t no point in even shuttin’ the gate.’ It really made a mark on me when she said that and I wrote it down. SPACE COWBOY came a couple days after with @shanemcanally + @lukerobert ✨Make peace with what doesn’t belong. You’ll find something better.”

Listen to her two new songs, “Space Cowboy” and “Butterflies,” below.