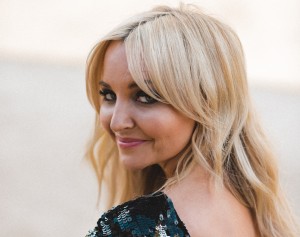 Songwriting Session is a column that goes behind-the-scenes with artists and songwriters. Each Sunday, a new songwriter will share their journey and provide lessons they’ve learned along the way. This week, Heather Morgan shares what she has learned as a songwriter.

From a young age, Heather Morgan caught the music bug and she nostalgically recalls making up songs when she was just five years old. There is even a home video of her a few years later where she confidently introduces herself before singing a song she wrote. “This is a song by Heather Morgan,” an eight-year-old Morgan boasts in the clip.

“I’m waiting for the perfect moment to pop it up on Instagram one day and show off my horrible hairdo and teeth and songs,” she says laughing.

The Texas native confesses that her mom still has all the scraps of paper and paper towels that she scribbled her early song ideas on. Years later, her mother would urge Morgan to write a song for a creative arts contest at her elementary school. Morgan went on to win the contest in the first grade and was undefeated throughout the remaining years she was eligible to apply.

“I would win every year, because nobody else entered, and I don’t know that I knew that,” Morgan tells Sounds Like Nashville over the phone. “So I just thought I was really great at writing these songs.”

As a child rehearsing for the contest, Morgan remembers setting up her boom box in her family’s dining room where there were good acoustics. She’d stay up late recording her song idea over and over again until she got the perfect take. Her wins gave the budding songwriter more confidence and soon she’d embrace performing at school talent shows and various establishments around Texas where she’d frequently run into fellow Texans Maren Morris and Kacey Musgraves.

By the time she got to college, Morgan had a band and she’d spend her weekends traveling the Texas circuit opening for acts like Randy Rogers Band. She’d also expand her writing palate, as Morgan became the person to run to after you had a bad breakup. She remembers girls in her dorm frequently knocking on her door saying, “I have a song for you.”

“They would tell me what happened and then I would try to write them a song to make them feel better. All the girls in the dorm would come to my dorm room and listen to this new song, so I always had an audience,” she explains.

Morgan soon found herself with a manager and released a record with her band. When the gigs got longer, instead of playing cover songs she’d simply write more songs to perform. In her senior year of college she had several shows with Radney Foster, who told her about the songwriting community in Nashville. During one trip to Music City she was invited to play at the Bluebird Café for a special showcase of Texas artists. It was that trip in 2003, and some convincing from Jody Williams of BMI, that she knew she had to relocate to Nashville. When she returned to Texas, she worked several jobs to save enough money to make the move.

An early champion for Morgan was A&R professional Joe Fisher, who was Foster’s publisher at the time. Already having written 400 songs, Morgan was asked by Fisher to play him her favorites during their meetings. Impressed, he soon scheduled her first co-write with Jeremy Spillman (Eric Church’s “Country Music Jesus,” “Sinners Like Me,” “Before She Does”).

“I remember Jeremy sat with me for a couple hours after we were done with the song and gave me all this great advice. [He] told me what to be cautious of and what was important as far as enjoying the songwriting process,” Morgan recalls. “I still remember the curb we sat on and talked before anyone got in their car. It was so awesome to have that experience on your first day.”

Morgan heeded that advice and by 2005 had her first publishing deal with Warner/Chappell. Things came full circle in 2008 when Randy Rogers Band recorded her song “This Is Goodbye” for their self-titled album. From sharing the stage with RRB to having them record her song, Morgan was well on her way to a successful songwriting career.

For more of my interview with Heather Morgan, visit Sounds Like Nashville.