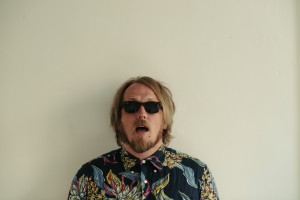 Songwriting Session is a column that goes behind-the-scenes with artists and songwriters. Each Sunday, a new songwriter will share their journey and provide lessons they’ve learned along the way. This week, Luke Dick shares what he has learned as a songwriter.

Luke Dick’s passion for music began at a young age. He vividly remembers hearing music wafting through his house in Oklahoma from his family’s record player and by the time he was in the fifth grade he picked up the drums for the school band. He worked all summer so he could buy a drum kit of his own and when his mother refused to let him bring it into the house, he created a makeshift studio in a chicken coop they had outside. He laughs as he recalls setting up his boom box and the speakers he bought at a garage sale so he could play along to his favorite bands on the radio.

Years later, after honing his craft, he’d find himself playing in various rock and alt-country bands and touring throughout the country. During his travels, Dick met a publisher based in Nashville and after visiting he decided to move there for the first time in 2006. However, he admits that his first stay was a little rocky.

“I didn’t really understand the lay of the land or how the business worked or anything,” Dick says over the phone. “I was just playing my own music and luckily one of the musicians, Kenny Greenberg, took me under his wing and I started making records with him and a lot of his friends. We made a good record and tried to get a record deal, and nobody was really interested in what I was doing and I decided I didn’t fit. Whatever I was doing was not what people wanted.”

After five years of little success in Nashville he decided to get his Master’s in Philosophy and began teaching. Dick says he figured he could eventually get a PhD and become a professor and play music on the side. So, he moved to New York where he planned to get a PhD and became an adjunct professor. Along the way he met fellow creative-types who spent their days as copywriters for advertisers and through their help he began making music for commercials and various advertisements like Hilton Hotels and Sweet ‘N Low.

While Dick explains that the work wasn’t the most glamorous thing for an artistically minded person, it was the first time he ever made money with music. He also set aside time to make documentaries, record his own solo project and play music while living in New York.

“When I was making a silly little ditty for Sweet ‘N Low I had fun and I wanted to make it as great as I could. I wanted to make it exciting in some way, so I didn’t find it to be any kind of a sellout whereas maybe five years ago I would have,” he admits.

Soon after, he was signed to a publishing deal with BMG. Eventually, he began traveling to Nashville but this time around things were different. About to have a child, he convinced his wife to try Music City one more time because he didn’t want to be traveling back and forth with a new baby. Nothing happened in his first year in town but when he signed another deal with Arturo Buenahora Jr., who he met years prior while pitching his previous solo work, things slowly began to pick up. Buenahora and Eric Church’s publishing company, Little Louder Music, signed Dick and early into his stay he’d see a cut on Kip Moore’s 2015 release Wild Ones with “Magic” and soon after with Church on “Kill A Word” and Miranda Lambert’s “Pink Sunglasses” and “Highway Vagabond.”

“It all started snowballing a couple years ago. More people wanted to write with me and I was able to find people that I write well with and not just have my calendar filled up with people I didn’t know or didn’t understand creatively or didn’t jive with creatively,” he explains. “That experience of getting a few cuts and then moving up the chain, writer-wise, opens up your relationships. You inevitably find people who are working at a really high level [and] it becomes this exciting thing.”

Now living in Nashville for the second time since 2014, Dick admits that he still feels new to town and remains eager about the next song he’s about to write. One of the songs that continues to increase in meaning for him is on Moore’s new project, Slowheart. A song called “The Bull,” Dick wrote it his first time in the room with Jon Randall and says Moore’s take on the song is a powerful one.

“Kip was the first one to take a chance on my songs. He said, ‘Man, you got anything weird or outside? Show it to me.’ So, he cut this song called ‘The Bull’ that I just love. That one, it was a fun write. When Jon Randall and I write, we’re sort of meandering around. It’s a weird spiral,” he explains. “It’s not exactly a set out path. I came in there one day and I was like, ‘Man, I had this dream. This dream was, I said to myself, ‘Thanks to the bulls that bucked me off.’”

For more of my chat with Luke Dick, visit Sounds Like Nashville.