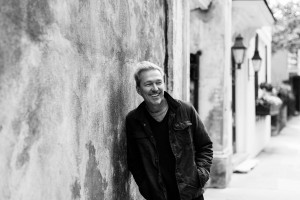 Songwriting Session is a column that goes behind-the-scenes with artists and songwriters. Each Sunday, a new songwriter will share their journey and provide lessons they’ve learned along the way. This week, Tommy Lee James shares what he has learned as a songwriter.

It took Tommy Lee James 30 years to record his first album, The Wontons, which he released in March. The Nashville-based singer/songwriter moved to Music City in 1987 thinking he’d see fame and an artist career within six months but this was far from the case. After a failed record deal he found himself writing songs for others and would soon garner cuts from acts like Reba McEntire (“And Still”), Brooks & Dunn (“A Man This Lonely,” “If You See Him, If You See Her”), Gary Allan (“Life Ain’t Always Beautiful”), Tim McGraw (“She’s My Kind of Rain”) and Blake Shelton (“My Eyes”), among others.

While his day job may be writing songs for country, pop and EDM acts, James’ current project The Wontons shares his love of Brit pop. Some of his early influences include R.E.M., The Cure and Television and he channeled these acts when sitting down to write the record solo.

“In Nashville, except for a few times in 30 years, everything’s been a collaboration co-writing,” he tells me. “So this was 100-percent just sitting at my desk at my laptop working on the songs myself. I would work on them over the course of a few days in my head while I was doing other things, which is a nice luxury to have.”

Songs on the album include “Shoot Me Down,” which details James’ realization that there is often safety in numbers when co-writing. He lost that security blanket on the record and admits that writing by himself was daunting at first.

“It felt like, ‘Wow, I’m really putting myself out here, writing these songs by myself.’ Even after all these years it’s a little bit intimidating. ‘Shoot Me Down’ is about that, it’s about going out on a limb and just going for it, without fear.”

Other songs dig deeper. “Sometimes I Cry” has James’ grappling with the death of his father and the reality of our sometimes short life cycle.

“Some of those songs are about taking emotional inventory a little bit. It’s a luxury to write songs like that, it’s good therapy,” he reflects. “I don’t necessarily get that personal when I’m trying to write for the country market, or the pop market.”

James found success early on within the country genre. He recalls Nashville being a smaller town in the ’80s where he knocked on doors his first day in town with a backpack of cassettes and publishers let him in the door and listened to his songs. After two years, he signed his first deal with McEntire’s Starstruck Entertainment company and laughs as he remembers writing “a lot of really bad songs for them.”

His first cut was a song called “I Don’t Love You” that Conway Twitty recorded in 1993. McEntire would record another song called “And Still” two years later, which became James’ first No. 1. He’d soon find himself signed to an artist deal with RCA Records but was eventually dropped before he released an album.

Thanks to a tour with McEntire, he met Brooks & Dunn who soon needed an acoustic guitarist and singer in their band so James joined them on the road and began writing with Ronnie Dunn. The two penned “A Man This Lonely” together which would give James his second chart topper. His next hit would be “If You See Him/If You See Her,” which he co-wrote with Terry McBride and Jennifer Kimball. It became a duet between Brooks & Dunn and McEntire.

“We wrote it as a duet and we wrote it specifically for Brooks & Dunn and Reba McEntire,” James recalls. “We had the title, ‘If You See Him,’ and then we decided to make it ‘If You See Him, If You See Her,’ to make it a duet. We actually talked about what he would say, what she would say, and how they would say it. We were really focusing on that. I was so proud of that [song]. There was so much excitement around it because you had two major artists at the time on the record so I felt pretty good about that one.”

For more of my interview with Tommy Lee James, visit Sounds Like Nashville.