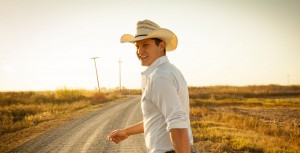 Jon Pardi’s star power continues to rise after a year of back-to-back No. 1 singles and a big win at the ACM Awards where he took home the trophy for Best New Male Vocalist. At his home in Dixon, Calif., though, he was always the star.

An adorable 1991 clip of a young Pardi posted to YouTube shows the singer performing Alan Jackson’s “Don’t Rock the Jukebox” with a toy rifle in hand that he strums like a guitar and a makeshift microphone stand where he belts the lyrics. A hint of what was to come 26 years later, a now 31-year-old Pardi is witnessing his lifelong dream come to fruition with the success of “Head Over Boots” and “Dirt On My Boots” from his sophomore album California Sunrise and his first-ever ACM Awards win in early April. It is fair to say that 2017 is unequivocally Pardi’s breakthrough year.

“It’s definitely like opening another chapter to where I’m going and what I’m doing and it’s exciting,” Pardi tells me over the phone recently from a tour stop in Canada. “I’ve been at the ACMs a lot so it was really awesome to go in there and win an award. It meant a lot to me. I was really sincere in my acceptance speech. The ACMs are great and there was the rush of playing on the awards show.”

The singer is currently on the road with Dierks Bentley and Cole Swindell as part of the What the Hell Tour and feels a different rush every night when he sees the seats filled as he takes the stage as the first opener each evening.

“There’s definitely a fan base out there that listens to all the music. California Sunrise is opening a new chapter to bigger things I would say. We’ve got a lot of great tours coming up next year that I can’t even talk about. You know how we’ve got to keep secrets,” he says with a laugh.

While he may be staying mum about what’s in store for the future, he is much more open about his past. Pardi moved to Nashville on February 23, 2008, a date forever etched in his memory. He nostalgically recalls dreaming of relocating to Music City since he was 18, but he says he had to grow up a bit first. He had a band in Chico, Calif., but the guys were graduating college and moving on to other jobs. After his drummer quit the band, Pardi knew he wanted to continue as a singer and songwriter even if he had to do it on his own. He saved money from working construction jobs, adamant that he had to at least try to chase a music career in Nashville.

After talking to several people in Nashville and learning more about Music Row and the songwriting community, he finally decided to made the leap from Northern California to Tennessee and hasn’t looked back since. While life as a musician is often a struggle, Pardi said it was songwriting that kept him going.

“Before Nashville, I was always writing melodies and songs. It’s like a piece of me that I kept recharged,” he admits.

Now it’s his fans that keep him going. He says he is thinking of them as he begins to work on his third record, just like he did when carving away at California Sunrise. Without a single on the radio for most of 2015 as he toured with Alan Jackson and played his own club shows, he says it was the fans that kept him inspired.

“If we didn’t have the fans, we’d be bummed out, but we’d show up to these clubs and sell them out and they’d be rowdy. We’d be having fun and they’d sing all the songs on the first record,” he marvels. “We’d play a new song and it’d be on YouTube the next day. That year connected the dots to California Sunrise, and kept you going. It’s really awesome to have die-hard fans. They keep the wheels going on the bus, and the request lines open.”

For more of my cover story on Jon Pardi, visit Sounds Like Nashville.