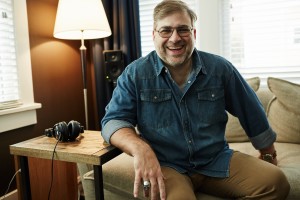 Songwriting Session is a column that goes behind-the-scenes with artists and songwriters. Each Sunday, a new songwriter will share their journey and provide lessons they’ve learned along the way. This week, Barry Dean shares what he has learned as a songwriter.

Barry Dean was in his mid-30s when he started writing professionally. While he dabbled in songwriting throughout his teens and continued to make up songs while mowing the lawn as an adult in Kansas, it was never something he considered chasing after. In a candid hour-and-a-half interview in his writing room at his publisher, Creative Nation, Dean reflects on his long journey to Nashville. As he recalls, it all started one afternoon while having lunch with his wife.

“We were looking at what to do for a living, where I should go and she said, ‘Well, what’s your passion?’” Dean remembers with a smile while seated in his office surrounded by guitars, keyboards and inspiring quotes hanging from the ceiling light fixture. “I laughed about it. I said, ‘I don’t think mid-30s is the time to be chasing passions.’ I had kids.”

Dean then told his wife that he wanted to be a songwriter when he was a kid and often dreamed of being around record labels and musicians. When prompted by his wife about why he doesn’t write songs he admitted that he did, often while mowing the grass or in his journal. Surprised at her husband’s secret passion, songwriting was something she kept in mind when asking if he would take her on a cruise for their anniversary the following month. He obliged and as it turns out, Dean’s wife found a songwriting cruise hosted by Nashville Songwriters Association International (NSAI).

The cruise hosted discussions about songwriting in the morning and the remainder of the day would be a typical vacation setting. It was on this excursion that Dean wound up performing and was invited to Nashville for a song camp. Soon he’d find himself traveling back and forth from Kansas to Nashville throughout the year, booking co-writes and taking songwriting seminars.

While picking up a guitar, he describes his early songs as “weird because I was learning to play the guitar.” He then begins to play one of the first songs that garnered him attention from a publisher, “The Boots of Sunny Red.” A story song told from the perspective of a boot, the music could be featured in a Western movie. He says his future publisher knew the song wasn’t a hit, but he liked the way Dean was thinking.

One piece of advice that Dean has taken to heart came from Mike Reid, who often tells songwriters to ask, “what’s the next truest thing I can say?” Dean relates this to several of the songs he’s written including Little Big Town’s “Pontoon,” Martina McBride’s “God’s Will” and Tim McGraw’s “Diamond Rings and Old Barstools,” which garnered Dean his first Grammy nomination.

“It’s a pretty big deal to me to be allowed in this community at all. I really admire these writers. Getting nominated for a Grammy is really exciting,” he says, becoming reflective. “For a guy who never thought he’d get to do it at all, that is amazing that it’s possible that it can be done. I’ve been watching that show since I was a little boy and I got to go and we got to get dressed up and be with our friends and somebody liked the song, that’s pretty cool.”

“Diamond Rings and Old Barstools” was a co-write between Dean, Luke Laird and Jonathan Singleton and almost wasn’t recorded. The three friends spent most of the day working on something else but didn’t feel like they were getting anywhere so they switched gears. Dean remembers Laird playing a guitar riff first and the song was written 40 minutes later. He admits they didn’t think many artists would be interested.

“It’s really country. There was a discussion, ‘do we even demo it because it’s so country?’” he says. “We decided we would do it because we wanted to hear Jonathan Singleton sing. They played it for George Strait and thought he would cut it and then he didn’t and we thought, ‘Well, that’s probably about it.’ Then McGraw cut it. That guy, he’s a song connoisseur. McGraw has an understanding of his audience and himself and songs. It’s just amazing, really. To think of his catalog… to be a part of that catalog of songs is a big deal.”

For more of my interview with Barry Dean, visit Sounds Like Nashville.