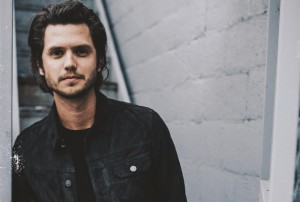 Songwriting Session is a column that goes behind-the-scenes with artists and songwriters. Each Sunday, a new songwriter will share their journey and provide lessons they’ve learned along the way. This week, Steve Moakler shares what he has learned as a songwriter.

Steve Moakler released his fourth album, Steel Town, on Friday (March 17), but he admits it feels like it is his first record. The singer/songwriter co-wrote 10 of the album’s 11 tracks, which he says makes for a personal release. As he explains, Steel Town has so much “chapter one information” and as a result, many of the songs vividly paint the picture of his roots. On “Steel Town,” Moakler discusses what life in his hometown south of Pittsburgh was like and how it shaped who he has become.

“In a steel town you learn how to bend and not break / How to hang in, how to cut loose, how to find a way / How to start from nothing and build it from the ground / Everything that matters most I learned about in a steel town,” he sings on the chorus.

“There are a lot of songs about looking back, and also a lot of songs about trying to be in the moment and appreciating the moment,” he tells me of Steel Town. “All those looking back moments come from my roots in a steel town. And I think it’s taken me, really, 10 years of being gone to really understand how much I’m a product of that place and how much it has given me that I bring with me everywhere.”

“It’s a very personal song but it also is the most up-tempo, rocking [one],” he says. “It sounds honestly like a Celtic bar blue collar anthem. It’s got a great energy to it and I think it’ll be really, really fun to play live, and should add a lot of energy to the show. That, paired with what it means to me, probably puts it in the running for the song I’m most excited to play.”

At heart, Moakler is a songwriter first and foremost and fans get a glimpse into his life throughout the entirety of Steel Town. Well known for penning songs for other artists including Dierks Bentley’s “Riser,” Moakler says songwriting is what first brought him to Nashville, adding that it is his deepest love.

“The thrill of the chase of writing a song, the feeling that comes over a room and over you when you’re writing a song you love,” he says, pausing. “When we wrote ‘Wheels’ and when I wrote ‘Steel Town’ and really all the songs on this album, that excitement of tapping into something new and special and real, that feeling keeps me going. I really don’t know what else I would do. If I ever lost my voice or for some reason couldn’t travel anymore, I could write songs and I could still be a pretty fulfilled, creative person. That really is my first love.”

For more of my interview with Steve Moakler, visit Sounds Like Nashville.