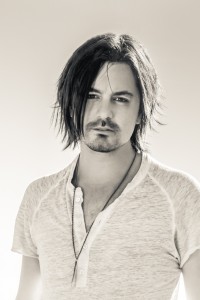 Songwriting Session is a column that goes behind-the-scenes with artists and songwriters. Each Sunday, a new songwriter will share their journey and provide lessons they’ve learned along the way. This week, Jamie Meyer shares what he has learned as a songwriter.

Jamie Meyer describes himself as a Swedish fish in a sea full of cowboys as the Gothenburg, Sweden, native currently splits his time between his homeland and Nashville. While he grew up on an eclectic blend of music including Swedish country, Rod Stewart, Queen, Del Shannon, Bruce Springsteen and Roy Orbison thanks to his mother, he recalls frequently listening to Def Leppard, Bryan Adams and Bon Jovi.

“At the end of every month, when she got paid from work, she always promised that I could buy one CD,” Meyer recalls. “I would spend the whole month watching hours of MTV in the ’90s trying to decide which artist I wanted to buy a CD from.”

It wasn’t until his first trip to the States years later that he would be introduced to American country music. Meyer was in Chicago and he vividly remembers being in awe of the many country radio stations here as there were no country stations for him to listen to in Sweden. An early favorite for Meyer was Kenny Chesney’s “She’s Got It All.”

While Meyer raves about the music festivals each summer in Sweden, he says the live music scene in Music City is incomparable.

“In Nashville you’ll find it everywhere, 24/7, and you can’t help but rise to the occasion and push yourself to becoming better. I love that about Nashville,” he shares. “Writing songs in Nashville is different, too. You often start with a title. In Sweden, we often start with the melody. To me, that was a big challenge to navigate. Nashville has helped me in writing better lyrics, even though I will probably always be a melody writer. Marrying Swedish pop melodies with the Nashville way of telling stories has become an interesting mission for me.”

As Meyer explains, country music is not about where you’re from, it’s about “feeling it on the inside and sharing your story.” Meyer is currently sharing his story with he world in the form of his brand new EP Miss This Town, which was released earlier this month. The seven-track recording was all co-written by Meyer with frequent collaborators including Swedish producer Hakan Mjornheim, Johnny Garcia, Jimmy Mattingly, Bridgette Tatum, Steve Dean, Adam Wood and Sarah Derr.

“Sarah Derr did a phenomenal job putting my thoughts into words. Jimmy Mattingly on the fiddle, Peter Ljung on the piano and Hakan Mjornheim’s string arrangement and production is a match made in heaven,” he adds.

The title track, meanwhile, was inspired by Meyer’s eventual move from his hometown.

“It started with a hashtag I wrote on Instagram when I was taking a photo an early morning in Gothenburg, Sweden. I lived with the title for a while and after my grandfather’s funeral the storyline of the song was obvious but it’s also a very universal song,” he explains. “I can see how it can connect with anybody leaving a place or even someone getting ready for graduation.”

While Meyer’s heart is showcased on every track on the EP, so is his energetic live show. “Live to Die Another Day” is a guitar-fused jam that details living on the edge. It’s the EP’s standout song that also showcases Meyer’s uncanny pop melodies and striking guitar parts.

For more on Jamie Meyer, visit his website. Stream the album below via Spotify.