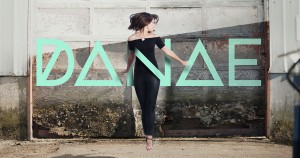 Songwriting Session is a new weekly column that goes behind-the-scenes with artists and songwriters. Each Sunday, a new songwriter will share their journey and provide lessons they’ve learned along the way. This week, Danae shares what she has learned as a songwriter.

Danae is living out the lyrics of her debut pop single, “Direction.”

For the past 10 years, Tiffany Danae Thompson has been refining her sound and as she sings on “Direction,” she has “got a new direction,” both figuratively and literally. A recent Nashville transplant from D.C., the former singer-songwriter is leaving this genre for her new pop project, which is a blend of what she loves musically.

“I’m pulling the intimacy of being a singer-songwriter into the pop space with songs that are personal but also larger than my own life,” Thompson explains. She looks to Chris Martin and Bono as champions of this type of music, and as inspiration for her writing style. Their lyrics are “often poetic and vague, but the songs still tell us stories about their lives,” Thompson explains.

Thompson says a quote she lives by is “what is most personal is also what is most universal.” Her latest songs reflect this motto, as the lyrics tell her heart’s stories with words that could be describing any number of situations. In her song “Prove,” Thompson writes, “I’ve got nothing left to prove / Couldn’t walk away if I wanted to / I’ve got something left to say / My fire for you won’t fade away.” Perhaps it’s about love or maybe it’s about a dream; the listener gets to choose.

Coming from her singer-songwriter background, Danae’s music is not only influenced by EDM (Electronic Dance Music), but also jazz, folk and rock.

“I’m excited that each track on my first EP sounds different. ‘Prove’ and ‘Direction’ might remind you of Katy Perry or Coldplay; while ‘Gold in the Dirt’ reminds me of Imagine Dragons. I’ve started a few songs and immediately thought, ‘This isn’t a Danae song.’ I know what I want my new music to feel like; so I’ve been leaning into that,” Thompson says. “I want it to leave people feeling encouraged and with a sense of momentum. That doesn’t mean all sunshine and flowers, but I want to make sure each song is in some way an echo of my core.”

Since her move to Nashville a year ago, Thompson has been collaborating with her executive producer, Sarin Kuruvilla. During their first co-write, he asked if she had any titles in mind and she immediately cited the title of what would become her first single under Danae – “New Direction.”

Over the next six months Kuruvilla and Thompson brainstormed melodies and verses while thinking about the overarching question in the song: “what does it mean to have a new direction?” Thompson said that after several sessions it was clear the lyrics were more than just a one off song, they were describing her evolution as an artist. 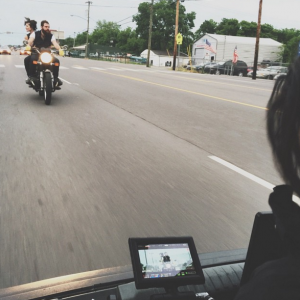 Danae’s first music video was shot in Nashville with the help of a motorcycle, an old truck and a friend’s minivan

As Thompson continues to find her own momentum for the new music coming out this year, she encourages other songwriters who are questioning a genre change not to be scared.

“Going in a new direction, being vulnerable in a place where you are unfamiliar is intimidating. But, if you’re being called to a creative adventure, you have to just do it,” she urges. “I don’t know what the next year or five or 10 years hold for me, but I know I’m growing and excited to be in this new season.”

Thompson adds: “Don’t let where you’re at today limit where you can go tomorrow.”

While jumping out of your comfort zone may be scary, Thompson explains it’s more terrifying to not push yourself, at least in her mind. “A mentor once told me, if you never fail at anything you are probably not taking enough risks,” she says. “Change is risky. But I believe we were created to grow and change. Isn’t that why they call life a journey?”