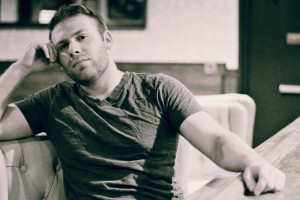 Songwriting Session is a new weekly column that goes behind-the-scenes with artists and songwriters. Each Sunday, a new songwriter will share their journey and provide lessons they’ve learned along the way. This week, David Evans shares what he has learned as a songwriter.

It’s rare to find a song that can make both men and women cry but Nashville based singer-songwriter David Evans accomplishes just this on his poignant song “Taking the Long Way Home” off his latest EP Something About a Love Song. A song that walks the listener through the lifespan of a relationship, “Taking the Long Way Home” was an idea David says he’s had for years but in a co-write with Addison Johnson the song came alive.

“I had that idea for a really long time,” David says over coffee at East Nashville’s Barista Parlor. “I knew what I wanted to do with it, the story I set up. I threw the idea out at a few writes but nobody had bit on it so I just held onto it. Then I went to write with somebody for the very first time, his name is Addison Johnson. Personally, I think he is one the best writers in town. He’s not signed or anything but if you sit with him for five minutes, he’ll write the whole song in his head and spit it out. I had seen him play out a few times so when we sat down to write, I wanted to have something good.”

David says after he suggested a few song options that Addison passed on he told him about “Taking the Long Way Home” and he agreed that’s the song they should be writing. The two songwriters wrote the majority of the song but decided to take a break at the last verse because it had to be “really good.” David recalls Addison saying that it’s a song that separates the big boys from the newbies and when they came back to finish it a week later the verse came together quickly.

“I played it that next week at the Commodore Grill and it does make men cry too,” he explains. “I almost couldn’t hold it together on stage. I think that last verse rings true because I’ve had a lot of family pass away from cancer and I think that’s what’s cool about country music, that you can talk about that stuff. Talk about the real stuff that connects with people. I knew when I couldn’t keep it together — I had to close my eyes during the song so I couldn’t look at people — but when I looked up I had three tables of women in front of me crying and I was like, ‘Okay, that songs works.’ Ever since then, it’s been one of my favorites to play out just because people can connect with it.”

It took many years of writing for David to get to “Taking the Long Way Home.” The Indiana native began writing songs when he was 14. While he admits sports was what he was most passionate about at the time, after playing basketball throughout middle school and high school he was getting burnt out and that’s when he turned to music. When he was a junior in high school his English teacher convinced him to try out for the musical and after initial resistance, he agreed and got hooked on theater. He joined the school’s choir that year and in his senior year transferred to a public school with a good music program. From there, David began private voice lessons which helped him get accepted to Anderson University’s School of Music where he studied music, theater and opera. A study abroad program sent him to Nashville for a semester and he immediately knew it was the place for him.

“That got me acclimated to Nashville. I really liked it and I figured my way around town. While I was there I started playing open mic nights too. I played the Bluebird open mic night a couple times,” he recalls.

Encouraged to make the move to Nashville after he graduated, David spent the summer working to save money for the move and he’s been here since August of 2013.

“I feel like in two years I’ve accomplished a lot. I think it’s going great so far,” he says with a smile. “I came down here for a reason and I feel like I’m doing pretty good at it.”

David released his EP Something About a Love Song in October and made waves as it went to No. 29 on the iTunes chart. For an unsigned artist this is a great feat and something even David was surprised by.

“My goal was to get it to chart on iTunes to create a buzz. It kept going up and up the charts and it got all the way to 29 which blew my mind. I was hoping to get close to 50,” he says. “I think for never doing a tour, that showed me that I have a lot of people who are supportive of what I do behind me and that was a big eye opener. Now my goal is trying to book shows for the spring and summer. I really want to get out there and show the people who bought my EP what I do. Pay it forward and give it back to them.”

David says the success of his EP release had a lot to do with word of mouth as well as his blue collar way of reaching out to everyone he knew to tell them about the project.

“I called people. I texted everybody I knew. I spent two straight days on my laptop from when I woke up until I went to bed of Facebook messaging people and letting them know what was going on,” he recalls. “Through that, it lit a spark and people shared it on Facebook. I tried to make everyone I knew aware of what was going on. It was cool too because I moved to Nashville and it was a way to show them what I have been working on. It’s my project to show them that it’s not for nothing. I moved down here for a reason.”

It’s this work ethic that David takes into his daily life. Currently, he works in retail which has him up at 5 a.m. every day so he can continue pursuing his dream of making music full-time in Nashville.

“I’m really trying to move out of that and I think that’s definitely possible with my EP doing well. I think this is the time, especially with booking shows and trying to make it my main income,” he explains. “I want to move to making music full-time and making a living doing it. Another thing I want to pursue is a publishing deal and I think that’s in the future. I’ll always have room to grow but I also think that I have really good songs.”

As with any career, there are rejections and missed opportunities that often have us doubting ourselves but David chooses to look at those moments optimistically.

“The cool thing about opportunity is that even if it didn’t work out, you have to remember that it was an opportunity. Another thing is looking back,” he explains. “When I first moved to town, I would sit at an open mic. I remember specifically I sat an open mic for five hours and I was the last one to play. I went from that to playing a venue where people pay me to play now. You have to look at where you’ve come from. Just be grateful. I think being grateful helps you push on.”

David advises every songwriter to find out what his or her best strengths are and to surround themselves with people to learn from.

“You need to write with people who are better than you, too. I think that’s huge, because you do learn from them. That’s what helped me, too,” he says. “Writing with people who are different than you, too. You need to work on exercising that muscle. It’s cool if you know what songs you write well and the style but it’s going to be all the same after a while. You need to stretch yourself. Knowing what you do well going into a write is huge.”

David Evans’ new EP Something About a Love Song is out now. Catch him live in Nashville at Fontanel on Dec. 22. 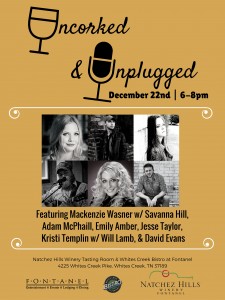