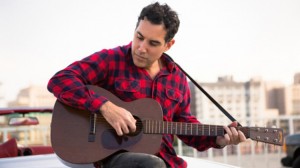 Nearly six years ago, I interviewed singer-songwriter Joshua Radin for Marie Claire. I remember being struck by his honesty about the music industry, his former record label and songwriting. In December, I had the opportunity to catch up with Joshua again before he released his sixth studio album, Onward and Sideways. Just like in 2009, he was extremely open about his recording process and I learned that he first picked up guitar at 30, never with the intention of making a career out of it. Below is an excerpt of my interview.

When singer-songwriter Joshua Radin sat down in his hotel room in Stockholm to write a song to make a new flame fall in love with him, he had no intention for anyone else to hear the music.

“My motivation was to woo her in the old romantic sense of the word,” the 40-year-old singer told me during a phone conversation from his home in L.A. “I would lay in bed all day with the BBC on mute and I would just write, thinking, ‘Will this song make her fall in love with me?’ I wasn’t even thinking of recording the songs for anybody but her.”

Soon enough he had a full body of work, and since the songs did what he set out to accomplish (she fell in love with him and now lives with Radin in L.A.), he decided to release them into the world as his sixth studio album, Onward and Sideways, which was released earlier this month.

“If they had not been successful I might have scrapped them. They are in the true sense a love letter,” Radin says.

Recorded in Stockholm and L.A., Onward and Sideways is 13 tracks of Radin’s delicate singing and vivid storytelling. From the early stages of a relationship on “Another Beginning” to the uncertainty of how to tell his sweetheart how he feels on “Blow Away,” it is as if the listener is inside that Stockholm hotel room as Radin performs the songs.

Which is exactly what he intended. “It’s like I’m telling a story to one person and they’re eavesdropping in a conversation,” he says. “There’s no way I would have been able to tell this woman how I truly felt about her, unless I wrote it in song.”

When asked if the songs from Onward and Sideways convinced his girlfriend to move to L.A. with him, he laughs.

“Hopefully it was not just the songs,” Radin reflects. “That’s why I really, really love this album, because what it accomplished is exactly what I wanted it to accomplish. Even if it sells just 10 copies, it’s OK. If it doesn’t do well at all commercially, it’s not the end of the world. It’s already achieved what I wanted it to achieve.”

Read my complete interview with Joshua Radin at Radio.com. You can hear his music in the latest Subaru commercial below.