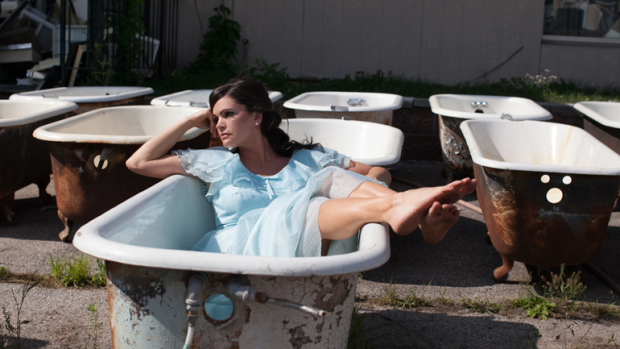 I had the pleasure of talking with country singer-songwriter Angaleena Presley, known for her role in country girl band the Pistol Annies alongside Miranda Lambert and Ashley Monroe, over the summer while she was in New York promoting her debut solo album, American Middle Class, which was released today. While preparing for our interview, I had her album on repeat and was struck by her honesty in every song. She sang things many of us would never openly admit and in her bio she stated that she has trouble not being honest. I had a pretty good feeling she’d be open to sharing the stories behind her songs as she’s said they are her autobiography, but I never fathomed she would completely let her guard down.

Throughout our interview, Angaleena opened up about her previous marriage, her hometown which is dealing with a serious pain medication epidemic and described the most honest songs on her record in so much depth. I was struck by her honesty and walked away wanting to re-listen to all her songs since I now knew the stories behind so many of them. Below is an excerpt from my interview with Angaleena. For the complete article, visit Radio.com.

“I got introduced to the world as Holler Annie with these two blondes beside me,” she told me. “I feel like I had to get in a band, make history and kick down a door so I could walk through it as a solo artist…I’m an older artist and I could sit there and be like, ‘Oh this should have happened.’ No. If it didn’t happen like this, you wouldn’t have had this story to write or this song that so many people connect with. I feel like everything happened the way it was supposed to happen for me.”

One song that strikes a chord on American Middle Class is “Pain Pills,” which Presley says is a protest song about the struggle coal mining communities face with prescription medication, specifically Oxycontin. It’s something that hits close to home for the singer.

“I started [that song] as I was on my way home from a funeral,” she says. “A friend of mine from high school OD’d [and] at the funeral the mom was walking in going, ‘Oh they had a heart problem. It was a heart issue.’ We knew what was going on. This is when I realized, this is starting to become a problem.”

Presley gets emotional when she talks of the song and the “hush-hush culture” that surrounds prescription drug addiction in her small hometown of Beauty, K.Y., where she says the problem is worse than most other places in the country. It took her four years to finish writing “Pain Pills” and once she did she learned of a family member who was suffering with the same pills she’s singing about.

“Addiction has really changed the face of my personal life and a lot of things in my family. That song just haunts me,” she says. “If there’s anything I would get up on a soapbox for, it’s prescription medication. I just think it’s a travesty how careless doctors are with that stuff. It still happens. You don’t hand a 16-year-old a bottle of heroin and say, ‘Here you go. Just quit taking these after 12.’ Let’s start talking about it, let’s get some resources, let’s get some help.”

Watch Angaleena Presley make her debut on the Late Show with David Letterman below playing the title track of her album, “American Middle Class.”