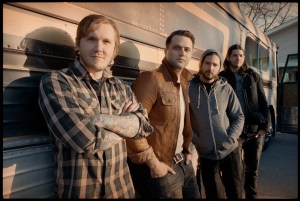 Last month, hundreds of dedicated fans of New Jersey punk band the Gaslight Anthem waited outside of Asbury Park’s The Stone Pony for their chance to be in the band’s music video for “45.”

Avid fans are often willing to camp out for days to meet their favorite band and Gaslight Anthem didn’t take this lightly. So, they decided to treat fans to an hour concert in addition to the music video shoot.

“We’re going to do ‘45’ about a million times but we’re going to mix it up with some other songs too so just bear with us,” said Gaslight Anthem frontman Brian Fallon to fans during the band’s music video shoot. “You suffer a little today and then you get yourself in a video forever!”

For my complete behind-the-scenes take of their music video shoot visit CBS.