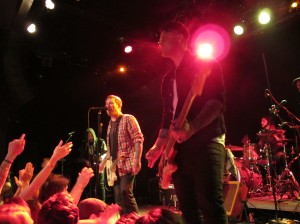 The Gaslight Anthem played to a sold-out crowd Wednesday night at Brooklyn’s Music Hall of Williamsburg. While several hundred lucky fans got an in-person view of their set others could watch the entire show across the globe as it was broadcast live on Livestream.

A preview of what’s to come on their new album Handwritten, due for release July 24, the New Jersey band’s nearly two hour performance included the energetic first single “45” as well as the bluesy “Biloxi Parish” which showcased a new side of the band. With distinct groove, though a slight deviation from the expected, Brian Fallon’s familiar vocals and memorable guitar licks impressed.

The band’s set covered the entirety of Gaslight Anthem’s catalog, from the poignant “Blue Jeans & White T-Shirts” and the classic “Wherefore Art Thou, Elvis?” off their first EP Senor and the Queen to the more familiar “Great Expectations” and “Old White Lincoln” from breakthrough album The ’59 Sound. All the while frontman Brian Fallon expressed his gratitude to the fans.

For my complete review, visit CBS.com.