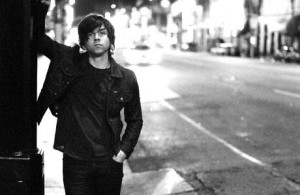 Not a man of many words, Ryan Adams performed with little more than a thank you for the majority of his 70-minute set last night. But, when he did address the audience halfway through the performance, he proved just how funny he truly is.

Shortly after 8 p.m., what appeared to be Adams dressed in a dog costume, walked down the aisle of Ed Sullivan Theater. Minutes later, the real Adams walked onstage and picked up his guitar and harmonica. No doubt comedic effect, the moment was soon forgotten as Adams took his place center stage.

Holding the audience in the palm of his hand, the room went silent as his whispered vocals, wavering harmonica parts and delicately strummed guitar reverberated throughout the room. Guitar centric tracks like opening number “Oh My Sweet Carolina” and “Lucky Now” from recent release, Ashes and Fire impressed. All the while, Adams continued to showcase his talent on a number of piano-centric tracks including fan favorite “New York, New York.”