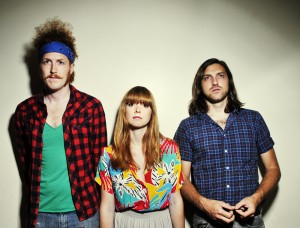 “I like to say that music is the language of our friendship,” Heather Robb says of her band, The Spring Standards, who will perform at the CMJ Music Marathon & Film Festival Tuesday evening.

The Brooklyn-based trio, made up of Robb, James Cleare and James Smith, met while in high school, and what started as friendship quickly turned into a band. At fifteen, the trio began playing and writing original material together.

Years later, after a brief separation followed by a reconnection, their three-part harmonies and energetic live show has continued to captivate audiences.

Having played CMJ before, Robb said it’s different being a New Yorker at a New York festival.

“In a lot of ways you feel more at ease. You feel a greater sense of, ‘I’m from New York. I know this city. This is our community,’” she says. “You feel more interested in creating an atmosphere where bands traveling from far away can feel comfortable as opposed to trying to feel comfortable yourself.”

For my complete article, visit CBS. For more on The Spring Standards, visit their Website. They play a free CMJ show tonight at 8 p.m. at Rockwood Music Hall.