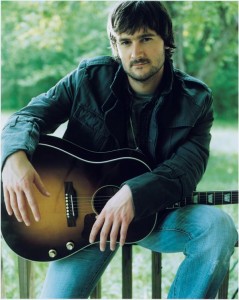 Known best for taking the stage in his hat and sunglasses while energizing audiences everywhere, Eric Church revealed a more serious, songwriter side when I sat down with him after his CMA Songwriters Series performance in New York.

Currently on the road as part of CMT on Tour with Miranda Lambert and Josh Kelley, Church plans to hit the studio for a follow up to his 2009 album, Carolina, and also has a tour with Jason Aldean and Toby Keith filling up his 2011 calender. And although many songs have been written for his next project, fans shouldn’t hold their breath for an album release next year.

“It’s hard to write on the road all the time,” says Church. “I usually write down a bunch of ideas or a bunch of melodies and then I’ll take a month to write, which I just finished doing in North Carolina. I spent a month there and wrote the next record so sometime late this year or early next year we’ll start recording. I get really obsessive and probably unhealthy about the recording process just because it really gets in my head. The biggest fear of my career is releasing a record to the public that’s not the way I intended. I don’t know how long the process is going to take, but we’ll probably start next year.”

For my complete interview with Eric Church, visit The Boot.