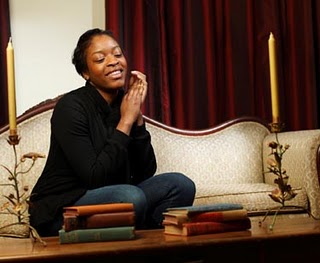 Pennsylvania based singer-songwriter Joy Ike has been making a name for herself. After releasing her second album independently, she won an opening slot performing at this summer’s reinstated Lilith Fair through a fan voted contest on OurStage. Since then, she has continued her grassroots approach to music to stay true to her values.

With vocals that recall popular singer-songwriters Sara Bareilles and Regina Spektor, Ike’s soulful singing style and breathtaking piano accompaniment impress. What is most striking of Ike is that she embodies a timeless and familiar quality. Songs like opening track, “Sweeter” draw the listener in with her upbeat singing style while the nearly one minute piano intro on “Give Me Truth” relaxes.

Beautiful title track, “Rumors” leaves an impact on the listener with Ike’s slow and powerful vocals accompanied by the light strokes of the piano and fitting string features. Despite the impressive music, it is Ike’s hopeful and introspective lyrics that allow her to stand out from popular singer-songwriters.

In fact, in an interview with OurStage.com, she touched upon the importance of creating memorable music.

“What a person says reflects who they are. I want to make music that’s purposeful and I want to create music that people can hold onto for a long time.”

With a release as strong as Rumors, Ike is well on her way.

For more on Joy Ike, be sure to visit her on MySpace and watch the interview below. You can download her track, “Sweeter” here.