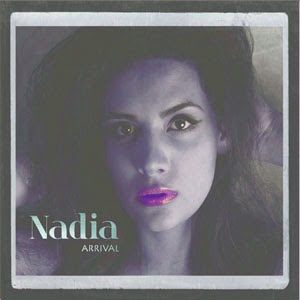 Nadia Kazmi’s debut release, Arrival, combines a unique blend of rock and soul with recognizable influences from many of music’s biggest icons. With poetic lyrics and strong vocals, Kazmi brings an eclectic flavor to her 10-track album. Encompassing many genres of music, Arrival, is just a hint of what’s to come for this singer-songwriter.

“Volcanoes,” draws the listener in right away with Kazmi ‘s powerful and jazzy vocals. The album starts forcefully : “I am a singer who cannot sing/A music maker but I don’t play a thing/Soul of my soul plays a game/I cannot win/This world’s treachery against me/Must be some kind of sin/Why open the door and/Not let me in,” she sings. The listener easily feels her passion and struggle accompanying the song through the musical buildup and moving lyrics. “Given the gift to speak, get close but never reach my peak,” Kazmi sings. An appropriate end to the song, much of the album deals with similar issues and frustrations – a woman’s quest to find meaning in this life.

Another emotional track, “Mother” tells the tale of a sister who kills her brother in his sleep. The woman in the song asks for forgiveness as she has evidently become her mother’s enemy after such a tragic event. Never failing with her unique storylines, Kazmi leaves the listener questioning what is to come next. Songs like “Mother” have a classic, ageless feel, almost as if they belong in another era.

Piano-based track, “Julian” is slower than previous tracks. Throughout Kazmi’s higher vocals the emotion is easily portrayed in a tale that involves reminiscing of a love that no longer exists. “Julian/This melody reminds me of you/Julian/How unfair, how unfair,” she sings. One can only wonder what may have happened.

“Arrival” recalls Queen and at times, Alicia Keys with Kazmi’s powerful vocals while tracks like “Tyranny of the Heart” introduces a different sound. With a slightly 70s styled beat, the song surprisingly resembles more of a club hit than previous ballads.

While Kazmi’s vocal ability is undeniable, the album lacks a cohesive flow jumping from soulful numbers to jazz tunes to club beats. One track especially, “Martians” has little to offer listeners. At times soporific with light guitar strumming and soft vocals, this song does nothing to flatter Kazmi. Her voice is powerful and comes across best when belting lyrics with feeling and the appropriate flattering music.

Despite the lack of symmetry throughout Arrival, most of the album is an appropriate testament to Kazmi’s talent. One example is “Prophets,” an edgier, stand-out track. With catchy percussion beats and Kazmi’s soulful singing (almost chanting style at times), the song hints at Kazmi’s talent and what is to come from this debut album.

For more on Nadia, be sure to visit her on MySpace.